Ahead of the release of Ian Gillan’s album with his boyhood band The Javelins, DW discussed with the co-founder of Deep Purple how the whole rock’n’roll myth was built. The singer also offered good advice for aspiring musicians. DW’s Helena Coelho had a chat with him during the Montreux Jazz Festival last summer.

DW: You and Deep Purple are part of a whole generation that reshaped contemporary music history. Why was the impact of the British boom of the 60s and 70s so strong?

Ian Gillan: The world was a different place then. There were lots of things going on. To put it historically, when I started doing music, I was 15 years old. I was a boy soprano in the church choir, but then, when I was 15, I broke it all and started moving into rock and roll. It was only 15 years after the end of the Second World War. Everybody wanted peace. Everybody wanted friendship.

In 1969 I joined Deep Purple. And during the 60s in England, there was an energy, a postwar energy. It was a new generation that had freedom. The parents wanted to give us freedom because after the dark days it was… The country was flattened, bombed, flat. There was rationing for food when I was a kid. There was nothing. We had to rise again from absolutely nothing. 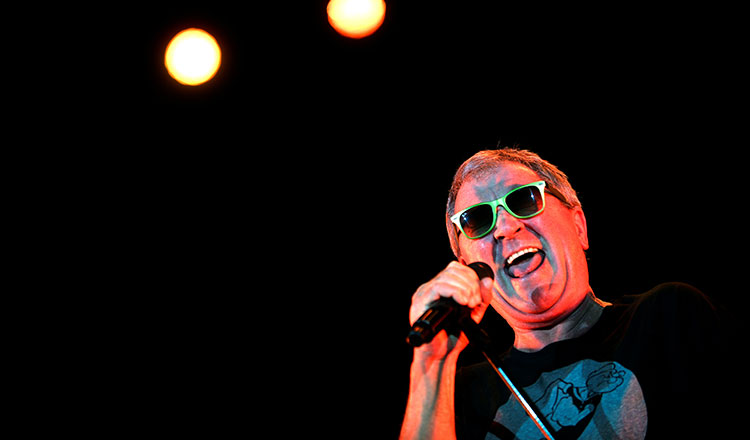 Following the Frank Sinatra era, which was immediately before us, we wanted to do things differently. We were listening to American blues. We were listening to old English folk music, listening to orchestral music, jazz, blues… all that sort of diversity was an inspiration for us kids in a band. So we copied everything that we could find and gave it our own energy. And so it emerged, I think, as a style.

And by the end of the 60s, early 70s, there was a desire to break free even more. And because by then, after an eight or 10 years, some musicians were becoming absolutely brilliant virtuous musicians. They were as good as classical performers in orchestras. The stage craft and the personalities were also evolving. And, when you put together the bands – Deep Purple, Black Sabbath and Led Zeppelin – they became all different although they were part of the same genre that was called rock.

DW: How do you see the whole myth built around rock and roll?

Ian Gillan: Well, I give credit to the journalists. I believe that you can’t judge contemporary music objectively. You have to be part of it. It’s a generation thing. If it’s good enough, it will survive and become classical. If not, it’ll fade away and just become a niche movement of some kind. In any case, the journalists who traveled with us were writing about the parties every night.

In those days, we’d play in clubs with 40 people or 100 people. Because they were tiny rooms, it looked like a lot of people. But at the bar, there was always a journalist, there were the publishers, there were the record company people, the managers, the agents, the promoters – all young people. And they were the ones. I mean, that was the “sex drugs and rock and roll”. It wasn’t so much or it wasn’t exclusively the bands. That’s for sure. Deep Purple never took drugs at all. I mean, I didn’t smoke my first joint until I was 38 years old.

Our life was exciting and fast moving. After we’d finished a show we drive back to London, go to a club, but we are all exhausted. Still the next day we’d read about all these things that were happening, and it was the journalists. They were writing all about those experiences and I think they captured the mood pretty well.

DW: Do you have any advice for new music talents?

Ian Gillan: Yes, of course. Some things never change: Copy while you’re developing, while you’re finding your voice. Copy everything that you love, try to be the same. In my time, I was trying to be the same as Ella Fitzgerald, Brook Benton, Elvis Presley, Little Richard, Buddy Holly, Cliff Bennett and The Beach Boys… I mean, all of my heroes, I tried to copy and learn the technique of the voice.

Learn from them and share them. Practice, practice, practice with other musicians as much as possible. Listen to what they like and try and be part of a unit. And then one day, it’s not guaranteed, but one day you might find your own voice and if you have all this experience of the technique, then you’ve learned the craft. Because there are two elements to being a performer. One is to learn the craft and the other is to be able to express the art. It’s like painting. If you learn about perspective and color and texture, then maybe one day you’ll be a great painter. But you have to learn that first: the craft.

So, just enjoy it and, if you get good, you will want to practice more. Because you’ll see progress and it will be encouraging for you. Embrace music even if you don’t have commercial success, music can be a wonderful friend for life.

IS GAMING MORE BENEFICIAL OR HARMFUL?