‘I think, therefore I am’

Eileen McCormick discovers the start-up Philosophy Café, and by chance meets Dr Taro Mochizuki, whose quest is to use philosophy to inculcate the idea of peace through coffee houses.

Throughout my teenage years, coffee got me through most of my existential questions. I think like most people when you sit down alone or with a group of friends over a cup of Java, the world seems to stop while ideas pour in. It’s hard not to feel like you are meant to be a philosopher when sitting in a coffee house – just like the many great thinkers before you did so long ago.

Because of my many hours in a coffee house, when I had a chance to take a philosophy class, I jumped at the chance having no real idea what I was getting myself into. So it’s my freshmen year and I am in my 8 am class course titled ‘Introduction into reasoning’. I naively assumed the class would be an open dialogue about the way we reasoned and came to understand… well, anything.

In reality it was if ‘a’ then ‘c’ not ‘b’. I just could not understand how a subject matter that comes from the Greek word meaning lover of wisdom went, in my opinion, so wrong. I squeaked by the class with a C and have since left the academic world of philosophy far behind.

This changed, however, this past weekend when I heard of a start-up Philosophy Café on street 150, near the Royal University of Phnom Penh, being run by a philosophy professor and some philosophy students.

Taro Mochizuki is a professor of philosophy at Osaka University, Japan, and Chulalongkorn University, Thailand. He has been fostering his network growth for philosophical practice in Cambodia since 2011 when he was invited to the Second Youth Peace Ambassador Training Workshop held in Phnom Penh from March to April 2011.

This was done with the cooperation between the Regional Unit for Social and Human Sciences in Asia and the Pacific at UNESCO Bangkok, the Cambodian Institute for Cooperation and Peace and Eubios Ethics Institute, where as a guest lecturer, he has started philosophical practice for peace building and education with his colleagues in the Royal University of Phnom Penh and Pannasastra University of Cambodia.

Dr Mochizuki has partnered and helped set up sister cafes in both Japan and Thailand so from what I can see, this has a real opportunity to be a larger reaching network in Southeast Asia for students and professionals from different backgrounds and social classes to bring back philosophy cafes from yesteryears. 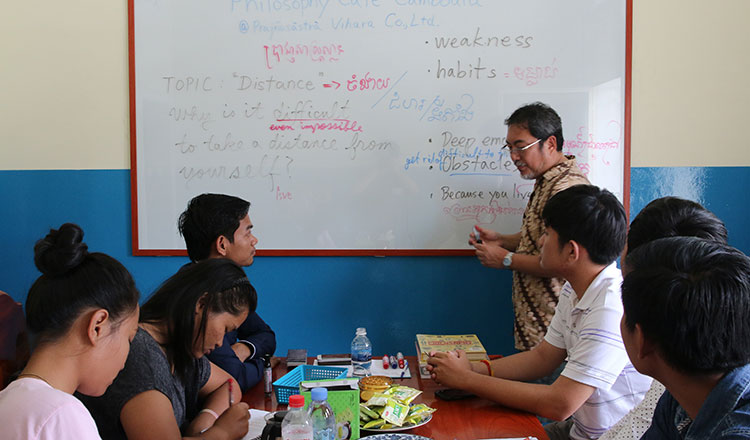 “I believe that by having ideologies, people become capable of changing society. First off, you have to look at your life and see what changes you can make.

“Only then can you start changing the society. I believe that is why we have philosophy. There is no point in ideology if you do not practice it. This means that if you only think but not do anything about philosophy, it loses its purpose,” he told Hiroto Hirayama of Osaka University in an interview.

The café part of Dr Mochizuki’s Cambodian endeavour has just started up. There was a three-day opening that allowed philosophers and non-academics such as myself to gather and discuss the concept of fear to abhorrent behaviour. We also spent a good amount of time analysing the word in Khmer for philosophy and how it is very connected to Buddhism itself. This begged many of us to ask how we could extend the concept of philosophy beyond religion and become more inclusive to reach Cambodians at the grassroots.

“The world is an amazing and exciting place because of all the diverse people in it. It seems as though people have lost vitality without having even a vision or a dream for their future,” said Dr Mochizuki in his Osaka University interview.

“It seems as though everything has already been laid out on top of this disciplined system for us to live by, and people are scared of escaping it. People say that there is a limit to our current system, and yet people still cling to it as the only system they believe they have,” he added.

For Dr Mochizuki, the revival of coffee houses could break the shackles of our mind.

“Philosophy is especially necessary for a country like Cambodia. To create a peaceful country, people must also believe in and think through the idea of peace.

“My wish is to help develop people so that they can begin thinking for themselves and become capable of criticising and making judgments through their own opinions,” Dr Mochizuki tells Osaka University’s Hiroto Hirayama.

What made the coffee house such catalyst for the great thinkers was its ability draw in people from all walks of life. Existing class and social divides limit most of everyday life but the coffee house breaks down these barriers. Socialites of the time could be seen talking to beggars or poets, and this allowed all sorts of novel notions to emerge.

With this notion, the group nurtured by Dr Mochizuki has already set its sights on expanding their café shop to a possible mobile café kart that would be run by philosophy students who wish to share their obvious passion and love for philosophy while also giving them working experience.

I personally look forward to what this project could be and really enjoyed my weekend sharing ideas. So if you have a chance, head to their Facebook page and contact them for upcoming events.

Slimming with our mind