Home - The making of a GOOD WRITER

The making of a GOOD WRITER

Thinking that real authors are the ones who have published countless titles under their names and have won several literary awards, Chan Kunthear has never considered herself to be one.

She is passionate about writing literary pieces, that’s for sure; but, she thought her write-ups are nothing compared to people she look up to in the local literary scene. While others have written hundreds of pages of stories, Ms Kunthear said her notebooks contained only short stories that she never made known to anyone.

Now 29, the Kandal native is set to publish a book she co-wrote with her three friends – Doung Chandy, Lim Phanna, and Suon Sotheara. The “Universal Love or “Sakal Sne” contains different short stories about the society written by Ms Kunthear and her friends who are also passionate writers just waiting for the write time to bloom and be discovered. Through his novel, Ms Kunthear can now call herself a published writer, an author.

“We’ve known each other through Facebook. But one of them is my friend from college. We discussed that we should publish a book since we know that we have written many pieces. Though we are young and we lack experience, we hope to get constructive comments from readers as well as senior writers since we are all starting this journey of promoting the value of our Khmer literature through our book,” she said.

But before she finally decided to publish her works, Ms Kunthear shared that she wanted to become a teacher. She pursued Khmer Literature at the Royal University of Phnom Penh and set her goal to teach little children after. However, that dream did not come true. Ms Kunthear got an unexpected job, which she later grew in love with. 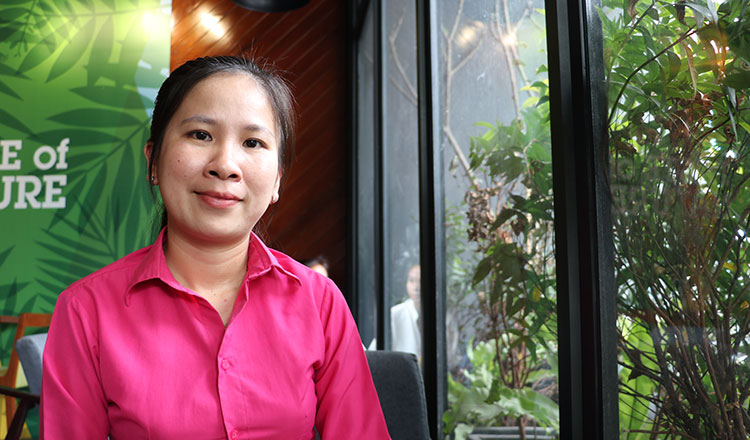 “After failing the exam to become a teacher twice, I was accepted in a department in the Ministry of Labour. I learned to love my job there. However, I still did not forget my love for literature. I did not let my job, which is quite far from literature, to hinder me from pursuing my passion to write. I wrote about my personal reflections on the society. Through my constant writing, I kept improving and then I started sharing my ideas to others,” explained Ms Kunthear.

Ms Kunthear also recalled that she joined her first literary competition in RUPP before, where she earned the third place. Not the one to back down, she joined again until she eventually got the first place in 2012. In 2016, she was awarded the fourth prize for her write-up by the Ministry of Culture and Fine Arts. That was how she realised that she shouldn’t give up on her passion no matter what.

“Everyone has their own techniques to tell a story. For me, I think that I have to understand deeply about the personality of the characters I focus on. The characters must show what I think about the society and what’s the best way to deal with it. That could be the reason my stories are more personal. They come from my own experiences and from the people I met.”

Ms Kunthear realised that many young Cambodians now show their interest to support Khmer writers. However most of the stories written by the new writers are almost about love and romance as they know it would be a sure hit to their target readers.

Ms Kunthear said, “Love and romance is an inevitable part of the human life. However, I personally think that writing is not just a way to survive in life, but it is a tool to share knowledge since our write-ups will really influence readers. We have to have that goal to spread educational and inspirational messages, it should not be solely about romance and love. It is the reason that my upcoming book is going to focus on the many sub-problems of the characters, who are, by the way, made to be as real as possible. I think it at least helps readers to think when they come to face the same problems.”

Learning robotics from an expert

Getting ready for the future