On the 20th of March, 1995, the Aum Shinrikyo cult, founded by Shoko Asahara, planted packets of a deadly nerve agent wrapped in newspapers and magazines in five of Tokyo’s busiest subway lines during its rush hours, killing more than a dozen people and injured thousand others.

When they arrived at their target stations, the Aum executors – all trained in prestigious Japanese universities before taking part in the cult – used a sharpened umbrella’s end to puncture yellow-colored packets, releasing fume to saturate the air in the carriages, primarily causing cough and teary eyes in the process. The agent was later identified as Sarin, a military grade nerve agent developed by Germany during the World War II as a part of Adolf Hitler’s grand scheme to defeat the Allies in the war. The toxic and fatal nerve agent had since been banned by the international community for its enormously inhumane effects on humans.

The incident stood as one of Japan’s most recent terror tragedies. In the aftermath of the event, no less than 13 people were dead and thousand others were injured, hospitalised and some became human “vegetables”. Sufferers who inhaled the agent described its smell as equivalent to that of paint thinner and had shown symptoms such as unstoppable coughs, runny nose, watery eyes, nausea, contracted pupil and darkened vision, short breaths, contracted muscle, severe prolonged headache, dysfunctional organs, and brain damage. 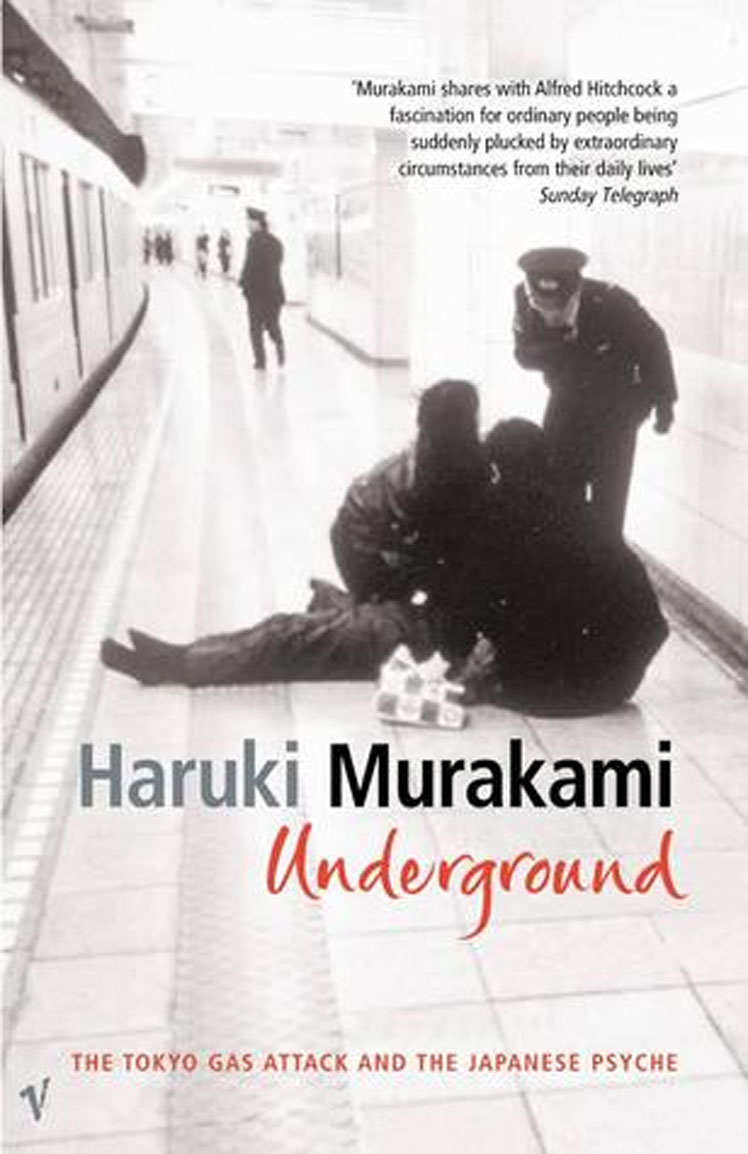 Several station attendants who discovered and handpicked the punctured packets with yellowish liquid oozing from it suffered severe injury and some even died due to close proximity and inhalation of the substance. Some of the Aum cult’s perpetrator also suffered minor injuries for mishandling the sarin-stained umbrella.

In “Underground”, Japanese novelist Haruki Murakami talked to victims of the gas attack to urge them to share their lives after the tragic event. Though he reached out to not less than half a thousand people, only 163 agreed to sit with him and share their stories. In each interview, victims of all ages and background, share their daily routines commuting through subway trains and what happened to them the day the attack happened and for some, how it has affected them physically and psychologically for months or even years later.

The author, with hopes to give a different voice to the sarin attack victims other than what had been shown in Japanese media, conducted the interviews for a year. He highlighted many aspects of the Japanese psyche, the isolation and individualism that have occurred after the attack. Murakami noted that many of his subjects expressed disillusionment and disappointment on the inefficient emergency response system during the attack.

Many critics found Murakami’s book as “one-sided” and “bias”. It, nevertheless, sold hundreds of thousands of copies when it was released.

If you want to know more about the controversial and fatal Tokyo subway attack and recognise the long-term effects of such tragedy to its victims, read Underground.

The rise of social media: boon or bane?