A fire engulfed hundreds of stalls at the Prey La’vea market in Takeo province’s Prey Kabbas district yesterday morning, destroying about five percent of the market.

Takeo Provincal Hall said in a statement that 120 stalls in the market were destroyed during the fire that began at about 1am, leading to thousands of dollars in damages.

It added that about five percent of the market was affected.

“The fire started in a stall that sells cosmetics,” he said. “The hairspray and other things exploded easily, spreading the fire. We are investigating.” 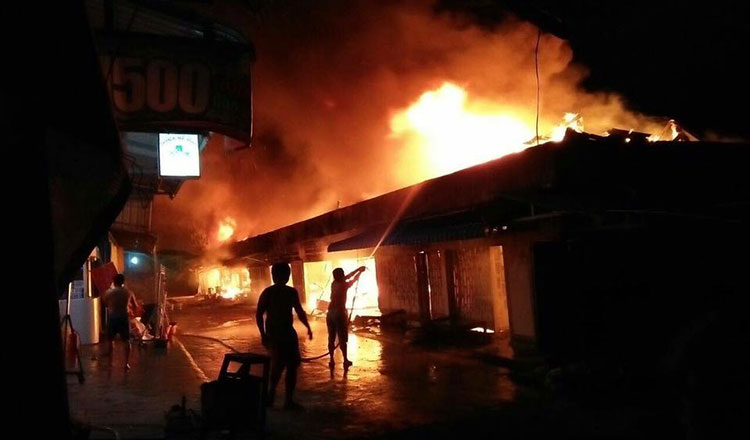 He noted that during the battle to extinguish the blaze, firefighters were worried that it would spread to gasoline tanks stored outside the market. However, the firefighters were able to prevent such an incident.

Der Hak, a vendor in the market, said his shop was completely destroyed by the blaze while he was sleeping.

“At about 1am, while I was sleeping, I heard chaos outside, and then I woke up and took my family to a safe place,” he said. “Most parts of my shop are damaged. The stall is like my home and now it’s gone.”

Neth Vantha, Fire Prevention Department director at the ministry, said that 40 percent of fires in the Kingdom were due to short-circuiting.

According to the National Police, there were 514 fires across the country last year. Twenty-two people were killed and 128 injured.