Mr Hun Sen created the council after July’s national election to gather input from all parties that contested the poll to move the country forward together after the ruling CPP swept all 125 seats in parliament.

Chhim Phal Virun, the adviser, said that the draft currently consists of seven chapters and 21 articles focusing mainly on council tasks and responsibilities.

Mr Phal Virun added that the group will submit the draft to Mr Hun Sen today for approval. If approved, the council would become a legitimate entity valid for the next five years.

“It was a fruitful meeting. Representatives of each party raised some good ideas, and their criticism and concerns were taken into account,”Mr Phal Virun said. “I think Prime Minister Hun Sen will soon approve the draft before he goes overseas.”

He said that during the meeting, each party also nominated three representatives to become council members. With the approval of Mr Hun Sen, each representative would be given a monthly salary financed by the Council of Ministers. 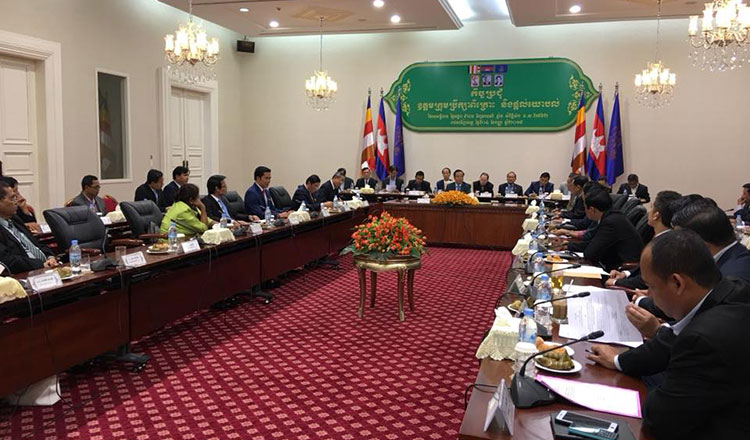 He said representatives are expected to provide feedback to senior government officials, including Mr Hun Sen.

Khmer Will Party president Kong Monika, who attended the meeting yesterday, said the council would be no different than any other independent council already established.

Mr Monika said that during the meeting council members discussed if they would be immune to government backlash for criticism.

“During the meeting, we put forth our concerns on our own security to see if we would be arrested or charged if we bring up problems of the government,” Mr Monika said. “We discussed how independent this council would be, and asked how well this council would function.”

Cambodian Youth Party president Pich Sros said yesterday after the meeting that he was glad to have been included in the discussions.

Among the issues raised by Mr Sros was the council’s independence.

“We had a chance to be straight forward about what exactly the function of this council would be,” he said. “I will see if the government will allow us to perform well in finding flaws.”

Last month, the Grassroots Democratic Party and the Our Motherland Party announced that they would only take part in the council after the formation of the new government, which is expected on Thursday.