All 125 elected CPP members will today attend the National Assembly’s first session and take oaths to be lawmakers before King Norodom Sihamoni.

The National Assembly’s secretary-general Leng Penglong said yesterday that the King will preside over the opening session today with the presence of dignitaries, ambassadors and representatives of some non-governmental organisations.

“The National Assembly has invited all ambassadors from the embassies in Phnom Penh, and some international organisations as we have done in the past. I am not sure who will join or who will not, but I’m obliged to invite all of them,” Mr Penglong said.

Mr Penglong acknowledged that the ambassadors of the EU and the US were on missions overseas and did not respond to his invitations.

CPP spokesman Sok Eysan said the absence of the EU and US ambassadors will neither hamper the National Assembly’s session nor affect diplomatic relations.

“Only if they close their embassies in Cambodia, then I would say there is a problem,” Mr Eysan said.

The US dismissed the national election, which saw the ruling CPP secure all parliamentary seats, as neither free nor fair and the EU said it was not representative of the democratic will of the Cambodian electorate.

Some lawmakers currently holding positions in the government are required to resign from the National Assembly after swearing in today in order to retain their positions, according Mr Eysan.

“Once they resign, the party will propose candidates to stand for parliamentary posts and submit a request to the National Election Committee,” Mr Eysan said. “Then, the National Assembly will hold a session for them to show up and take oaths. It will not be difficult to make a replacement.”

Mr Eysan said that both lawmakers and government officials will be able to perform their roles and work effectively as pledged before the July 29 general election.

Mr Eysan refused to reveal the composition of the replacement lawmakers, noting that some ministers who were elected as lawmakers are likely to resign from the National Assembly. 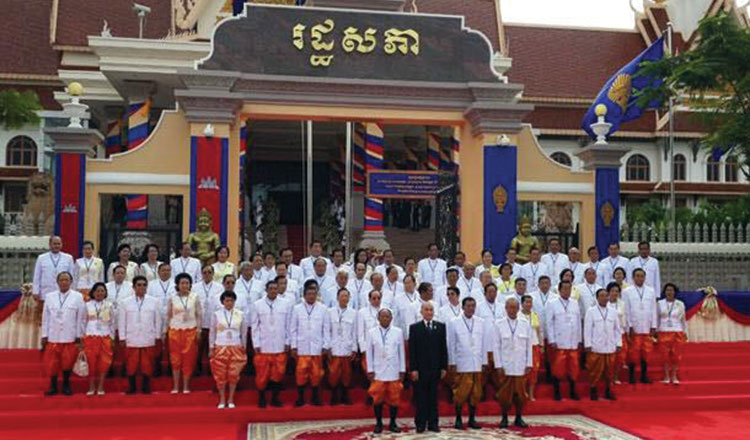 He added only Prime Minister Hun Sen could unveil the replacement when a new government comes into shape.

San Chey, executive director of the Affiliated Network for Social Accountability, said yesterday that lawmakers should not have positions in the government to ensure transparency and independence of their minds.

“Conflict of interests is likely to occur for a person holding two positions at a time in both the government and the parliament. I think that now there are numerous talented people who the ruling party could offer opportunities to,” Mr Chey said.