Cambodian and Vietnamese authorities in a meeting yesterday agreed to remind their respective citizens living along the border to not lease land to each other and to help prevent transnational crimes.

Takeo provincial Governor Ouch Phea said yesterday after the meeting that both sides pledged to disseminate more information and instruct citizens to cease leasing land along the Cambodia-Vietnam border.

“At the meeting, we were reminded of border issues regarding farming and leasing land to Vietnamese. We asked the Vietnamese side to inform their citizens to not go into Cambodia’s territory to do the same,” he said. “But the act itself hasn’t occurred in a long time, so we attended the meeting only to remind people.”

Mr Phea added that the Provincial Hall will also remind Cambodians to not lease their lands to Vietnamese nationals. 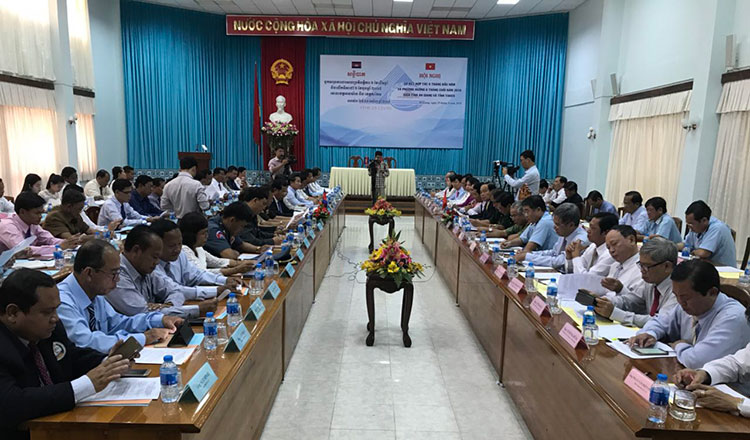 “What we’ve done is disseminated information and monitored the borders,” Mr Phea said. “We will continue to educate our people and ban the lease of land to Vietnamese.”

He noted that the two countries are also encouraging deeper cooperation for the prevention of human and drug trafficking.

Vuong Bin Thanh, a Vietnamese provincial chairman, said yesterday that Vietnam will cooperate with Cambodian authorities to prevent the leasing of Cambodian farmland and to secure the border.

In late 2015, the government issued a directive to prohibit Cambodians from renting or selling land along the border to people in neighbouring countries such as Thailand, Laos and Vietnam.

The directive was in response to Cambodian citizens leasing their farmland to people from bordering countries. Land sold was used for farming and businesses.