Four construction workers died and another worker sustained serious injury today when the construction elevator they were standing in fell off from a building in Pailin province’s Sala Krao district, police said.

Sala Karao district police officer Meas Sokhom said that three men died at the scene while one of the two injured workers died on the way to Battambang provincial hospital.

“It happened at around 7:15am. There were five people in the accident and three of them died instantly and two others were brought to the hospital,” Mr Sokhom said.

“The cause of the accident was that the ropes were severed after the construction elevator was overloaded with ceiling sheets and sand along with five people on it,” he said.

Vorn Dara, provincial police officer, said in the report that one of the two workers who were sent to the Battambang hospital was pronounced dead at the hospital.

Police identified the four deceased as Thorn Kork, 20; Borey, 23; Prak Khoeun, 38; and Lim Veng, 18. The injured is Torn, 32 and is receiving treatment at Battambang provincial hospital. 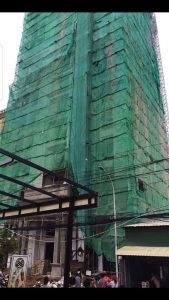 Mr Dara said that the construction elevator was reaching the sixth floor of the 12-storey hotel building when its ropes were severed. The police are still investigating.