Home - Hun Sen: I do not hate Americans

Hun Sen: I do not hate Americans

About one month prior to an official state visit to the United States, Prime Minister Hun Sen yesterday said that he has no hate for the US, only those who meant Cambodia harm during the height of the Vietnam War decades ago.

Speaking to Cambodian athletes upon their return from the 18th Asian Games in Indonesia, Mr Hun Sen said that he only carries resentment for Americans who invaded the country after a US-backed coup deposed Prince Norodom Sihanouk’s rule in 1970.

“I have never hated an American, but I do hate those who invaded Cambodia,” he said. “I hate whoever sent troops. I hate them because they wanted to topple Cambodia.”

He noted that former US president Richard Nixon dropped bombs in Cambodia in the 1970s.

“I do not hate Americans,” Mr Hun Sen said. “All my children studied in the US and even one of my sons studied at West Point.” 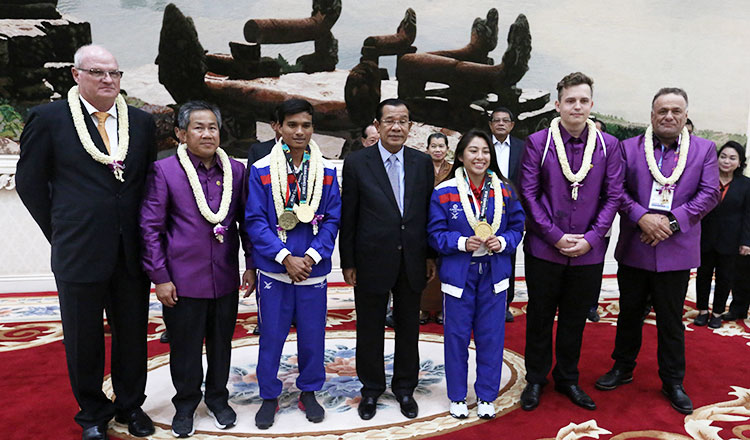 Under the leadership of General Lon Nol in the early 1970s, America bombed the Ho Chi Minh Trail in Cambodia.

President Nixon approved the bombing operations dubbed as “Menu” without informing Congress and the general public.

More than 3,000 bombing runs were carried out over Cambodia’s bordering provinces with Vietnam.

About 110,000 tonnes of bombs were dropped during a period of more than one year.

Mr Hun Sen last year made remarks that the US should own up to its past and cancel Cambodia’s war debt.

“I hope the government of Donald Trump will think about Cambodia’s debt accumulated during the reign of General Lon Nol,” he said. “Should the debt be cancelled? It’s difficult for us to accept bearing debt when the money went to buy bombs and bullets to kill Cambodians.”