A Phnom Penh Municipal Court judge yesterday issued a summons for political analyst Kim Sok to appear in court next week over defamation for allegedly accusing the government of running a state-sponsored assassination squad.

Prime Minister Hun Sen’s lawyer filed the legal complaint against Mr Sok earlier this year while he was still in prison serving an 18-month jail term stemming from a separate defamation case after he accused the ruling CPP of murdering fellow analyst Kem Ley.

Mr Sok completed his sentence late last month and walked free from prison, almost immediately drawing the ire of Mr Hun Sen after he criticised the Prime Minster’s initiative to create a council of all political parties that contested the national election to gather input and move the country forward together.

After Mr Sok’s comments, Mr Hun Sen threatened him with arrest for not yet paying the ruling CPP $200,000 in compensation as ordered in his previous defamation conviction. Mr Sok then fled to Thailand, where he apparently remains.

Judge Leang Samnath yesterday stated that Mr Sok must return to be questioned over the new defamation case.

“In case he fails to appear, we will issue an arrest warrant,” Judge Samnath stated in the summons.

Y Sok Khy, director of the Interior Ministry’s anti-terrorism and transnational crime department, said yesterday that officials are asking Thai authorities to locate and deport Mr Sok back to Cambodia.

“We have been cooperating with Thai authorities to bring him back to appear in court,” Mr Sok Khy said. “We have good cooperation with them, and I hope they’ll send him back.” 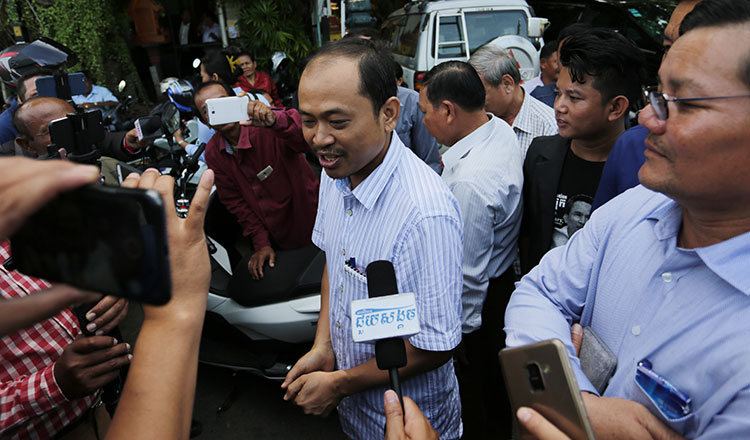 Soeng Sen Karuna, a senior investigator at the rights group Adhoc, said yesterday that if Thai authorities chose to comply, it would further indicate the decline of respect for human rights in Thailand.

Mr Sen Karuna said that Mr Sok should attend court out of his own free will. “Kim Sok should show up.”

He said the creation of the council was to dissuade various parties from protesting the election results.