The Takeo provincial culture department on Sunday took possession of an ancient statue, believed to be of the Hindu God Vishnu, found by a farmer in Traing district’s Sambour commune while ploughing his land on Thursday.

District police chief Phan Phal yesterday identified the farmer as Nget Aun and said he reported the find to the department and urged authorities to come and take it.

“He actually contacted the authorities to take possession of the statue,” he said. “This is unlike previous cases where people find ancient artefacts and try to conceal them from the department.”

Mr Phal noted that many people believe that the statue is that of the Kingdom’s Queen Soma, or Liu Yeh, who ruled the country in the first century.

“It remains unclear who the statue represents, but people keep saying that it is of Queen Liu Yeh and this needs confirmation from experts,” he added. 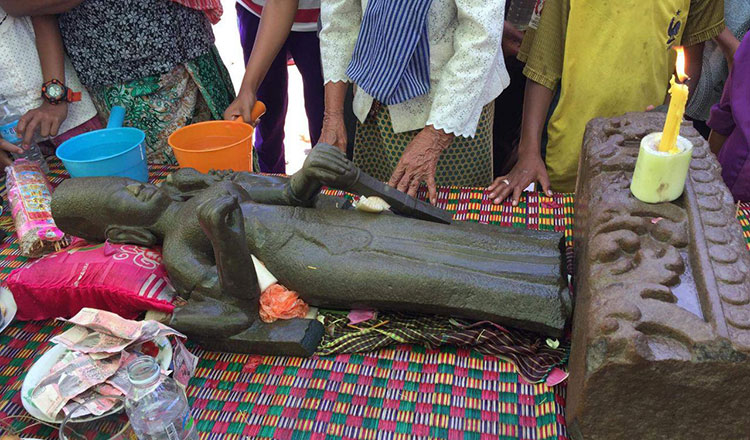 Sao Tong, the department’s deputy director, said that the statute is more likely to be that of Vishnu and that it was sent to the provincial museum yesterday afternoon.

“The statue is likely to be that of Vishnu and it has yet to be dated,” he said. “It is made from sandstone.”

He praised people who reported such finds to the authorities and noted that the department rewards them, but did not disclose the amount.

“We always give some money to those who report findings to encourage others to do so,” Mr Tong said. “Sometimes we also give them commendation letters from the Culture Ministry.”

He added that while there are no actual benefits to them, some people who find artefacts keep them in the house for good luck and this could lead to items of historical value becoming lost for good.