Home - Tracing the roots of Yike and Jikey

Tracing the roots of Yike and Jikey

Though Cambodia and Malaysia do not sit geographically close to each other like the Mekong sub-regions, these two countries have interconnected influences in history that formed both their arts and traditions.

So, it’s no wonder why students and classical dance enthusiasts all flocked to see and learn about the Lakhoan, a traditional theatre dance, showcasing Yike (from Cambodia) and Jikey (from Malaysia) through Cambodian Living Arts’s Exploring Identities cultural season. Cambodian and Malaysian experts on these dances were invited to explain the roots of these dances and how they may be interconnected with one another.

After showing more than 20 forms of Lakhoan, traditional dances and other arts that are still widely practiced in Cambodia, Aok Buntheoun, vice dean of the Faculty of Choreographic Arts at Royal University of Fine Arts, shared the roots of Yike in Cambodia.

He said, “Lakhaon Yike is a popular ancient form of Cambodian musical theatre that originated from Malaysia (Melayu Island, as it’s formerly called). Due to the songs utilised in this Lakhaon, it can be assumed that Lakhaon Yike appeared in the late 8th century during the reign of King Jayavarman II.”

Uy Latavann, a well-known performer and trainer of Yike and Bassac Opera, said that according to researchers, Cambodian people started using Cham people’s drum to create a form of theatre dance which was historically called “Lam Yike”. And many parts of Cambodia still recognise and use this word until this present day though its name had already changed.

“Songs and drums are the most essential and needed instruments for the Lakhoan Yike performance before. Later on, people added Tro Ou to make the sound of singer become more beautiful. It is noticeable that Yike in Takeo province are still using a crown which looks similar to the crown of Cham’s queen,” said Ms Latavann.

After showing the different costumes and styles of two forms of Lakhoan Yike, she added that there are more than 80 songs describing different emotions of characters. However, it is interesting that some parts of the songs cannot justify its meaning though the singers can sing every single word well.

After listening to both speakers from Cambodian side, Rosdeen Bin Suboh Suboh, an academic lecturer and experienced director from Malaysia, expressed his surprise that people in Cambodia believed that Yike originated in Malaysia while Malaysian have believed that their Jikey is originally from Cambodia and Thailand.

“The essence of Jikey is that performers have to remember the songs and repeat again and again until they remember. I have to admit that there is no meaning that we can understand in some of the songs, aside from what have been taught by our ancestors. We therefore have to preserve though we did not really know its roots well,” said Mr Rosdeen. 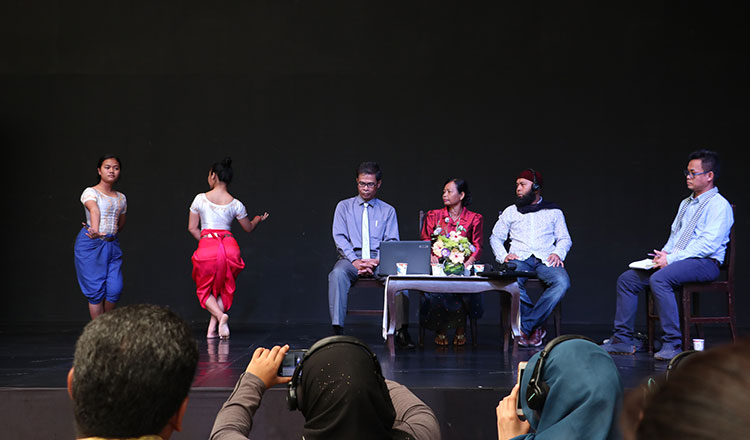 In Malaysia, there are some workshops of Jikey performances that are being taught to students supported by their government.

Aside from the explanation from the three speakers, the morning discussion also allowed the audiences to share and raise questions. One audience said that Cambodia might have influences from Malaysia since Cambodia had lots of business interactions before. However, he also tried to explain that majority of the wordings of the songs used in the performance uses Thai language.

Though the audience and the three speakers cannot find the binding roots of Yike or Jikey, they promised that they will be trying to preserve this form of arts for as long as they can.