Thriving in the competitive business sphere

As startups are starting to gain so much attention from the community and many young people are starting to take part in different entrepreneurial endeavours, it is understandable that the market has gone much more competitive in the recent years. And for those who are in this sphere, the objective to stand out isn’t an easy task.

Moa Angkearith is the strategist, designer and owner of two companies, Offset and Siqnature. Quite overwhelming roles for a 23-year-old.

Siqnature works with executives and managers to build stronger communities with their campaigns, and help them flourish their brands through the power of graphic design. Meanwhile, Offset is a printing agency with simple and easy process. The printing company provides services with consistent quality outcome for business and organisation of all sizes, making sure that the clients feel at ease and satisfied with all their printed materials.

Being the co-founder of both companies, Angkearith surely has a lot on his plate.

After graduating in high school, Angkearith, who came all the way from Steung Treng province, pursued higher education in the city of Phnom Penh. As the information on bachelor degrees was limited back then, he did not choose to study on something that was related to his passion. But then, he didn’t know back then what his passion really was to begin with. What Angkearith knew was that he loves solving problems.

“I enrolled in university, which I heard people were talking about a lot back then. I didn’t even know what I really liked or planned to do.”

While he was halfway through his university, taking dual degrees was such a huge thing back then. Surrounded by such environment, he was inspired to do the same. He enrolled in another university, which at some point is helping him in his present career. However, he did not finish the second university he enrolled in; he only managed to finish one degree.

“Talking about relevance, the first degree I took did not help me much in my career. However, the second university shaped my critical thinking, even though I didn’t manage to finish it due to conflicts of schedule.”

The second university he enrolled in was also where he started to find his passion little by little through volunteering. He explored in different positions, until he found what he liked the most, which is designing. Since then, he accepted numerous designing jobs, including designing logos and shirts and many other stuffs. Since he didn’t go into a design school, his passion and skills were considerably self-taught. He then created a Facebook account for people to contact him directly to do designs. That Facebook account is where he found like-minded people which led to him to Siqnature team in 2016. 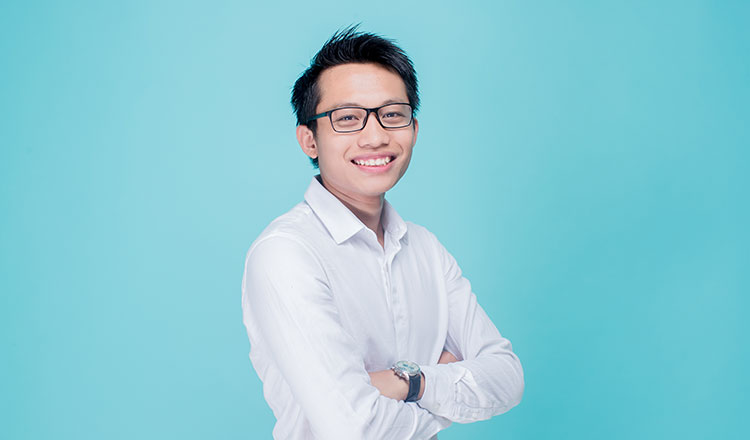 “Volunteering, self-taught skills and luck are what made me become who I am today.”

It was through Angkearith’s belief that designs – as much as writing and speaking – is a form of communication that people need in their daily lives that Siqnature was established. His Offset company was officially launched earlier this year to proving printing services to people.

With two companies under his name, the responsibilities can get too overwhelming. But Angkearith encourages young people to start their own businesses as well and do something they love to do.

“It is important to know how to play the game. So seek for guidance or mentorship from those who have been in the field before you, simply because they know how things work.”

In order to stay relevant in the business, Angkearith said it is important to always continuously learn from others and give nothing but high quality of services and products to your market.