Police arrest a suspected US paedophile

Police have arrested a suspected US paedophile who fled the United States to Cambodia over the sexual abuse of children. 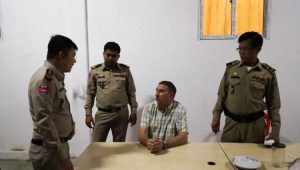 “He was arrested at night after police carried out an arrest warrant,” Maj Gen Narin said.

The US Regional Security Office in Cambodia has asked the General Immigration Department to arrest William Brenner while he was suspected of living in Preah Sihnouk province without valid travel documents, a violation of Cambodian immigration law.

The RSO has been working with relevant US agencies to locate and return him to the United States for prosecution.

Ministry plans law to compensate those wrongly imprisoned by courts