Mr Hun Sen said the Water Resources Ministry is preparing to deploy the pumps to the provinces’ Stung Treng and Kratie citites to help drain floods from the overflowing Mekong river.

He said that the levels in Mekong river are still rising in Stung Treng, Kratie and Kampong Cham provinces.

“The water level in the river’s upper stretches such as in Stung Treng, Kratie and Kampong Cham provinces has not receded yet,” Mr Hun Sen said. “The water levels there are still above the danger point.”

The Prime Minister noted that while there was heavy rain causing floods in some provinces, Banteay Meanchey, Battambang and Pursat were facing drought.​ Mr Hun Sen said the floods have affected thousands of families and destroyed several thousand crops, especially rice, noting the losses have not impacted the economy yet. 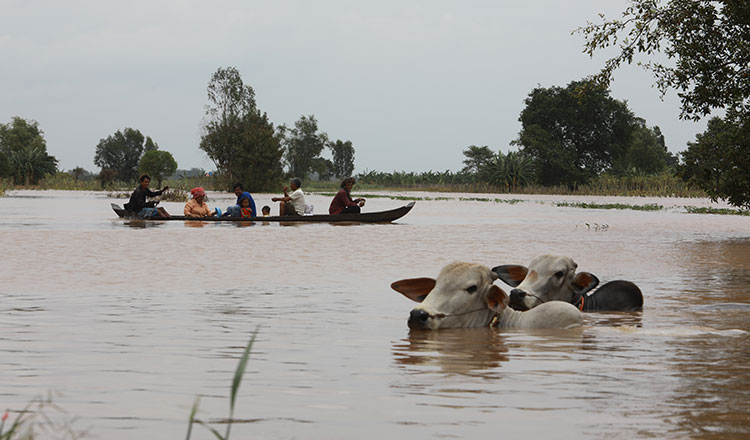 Keo Vy, spokesman for the National Committee for Disaster Management, yesterday said 30 people have died from the floods.

He said 14 people died in Kampong Cham, ten in Prey Veng, three in Kratie, two in Stung Treng and one in Tboung Khmum.

He added that a total of 9,000 hectares of paddy fields are affected with 3,000 totally damaged.

Mr Vy said more than 90,000 people were affected by the floods and 8,000 were moved to relief centres. Roughly 142 houses were totally destroyed.

A Water Resource sMinistry forecast yesterday said that the level of the Mekong river in Stung Treng province was at 10.98 meters, above the danger level of 10.7 meters.

The water level in Kratie province was at 22.17 meters, over the danger mark of 22 meters.

India expanding ties with the Kingdom

Kandal lakes to be protected