Home - More parties to join the council if they are qualified, PM says

More parties to join the council if they are qualified, PM says

Prime Minister Hun Sen said that he will consider allowing more political parties to join the Supreme Consultative Council if they are qualified.

“I will review qualifications of those parties whether they have enough capacity to join or not. Previously you [GDP] said you needed time to consider and now I need time to study and consider it, too,” he said.

“I welcome you but you do not need to use the media [to announce] when the Council of Ministers invite political parties, they use letters to invite you so you have to respond with official letters to ask the Prime Minister,” Mr Hun Sen said. 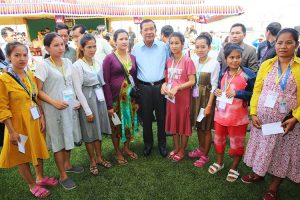 The Supreme Consultative Council is a forum Mr Hun Sen initiated to gather input form political parties that contested the national election to move the nation forward together following the CPP sweeping all National Assembly seats.

The representatives of 16 political parties took part in the Council.

Mr Hun Sen said last week that the Council will give feedback on the draft budget before it is forwarded to the Council of Ministers.