Home - Deminers to get training in China

Deminers to get training in China

The Cambodian Mine Action Authority is going to dispatch 40 of its demining staff to China to receive training next month as part of China’s commitment in supporting mine clearance.

Ly Thuch, vice president of the Cambodian Mine Action and Victim Assistance Authority, said the training will help the deminers improve their work in clearing farmlands.

“The trainees are in charge of examining and controlling land clearance work, so they will go and learn skills in China,” he said. “They will be able to improve their ability to demine the land to make way for our people to do farming.”

“China offered this training to our staff, and also provided us with equipment for demining,” he added. “There are 40 staff going for the training this time and it will last six weeks in Nanjing province. This is the third time that we sent our staff to get training in China.”

He said that China has relentlessly engaged in demining Cambodia, which is ridden with unexploded ordnances due to the civil war.

“China has been actively demining Cambodia through such training and equipment donations,” he said. “We would like to thank them for helping us.”

Meanwhile, the Akira Museum in Siem Reap’s Banteay Srey district caught fire on Monday afternoon after an explosion in a room storing unexploded ordnance, according to a Cambodian Mine Action Centre official.

Mean Ratha, a CMAC official based in Siem Reap, said that no one was injured in the incident, but the room was almost completely destroyed. 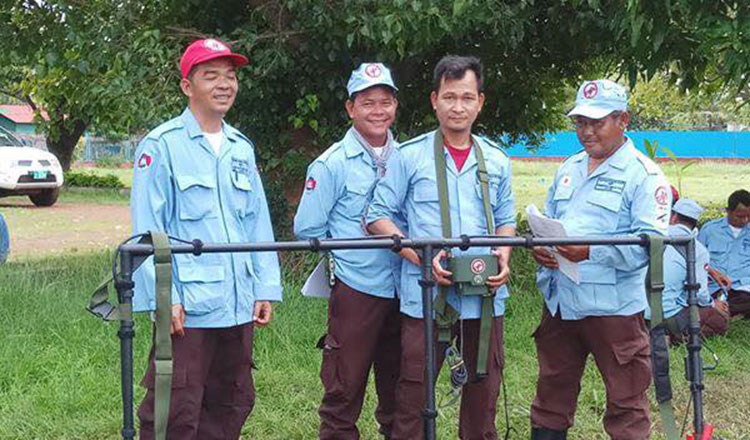 “Obviously when we went and checked the room which was almost completely destroyed with the door and windows blown off, we saw two mosquito spray bottles and it is impossible that it was caused by the electricity because there were no electric wires there,” he added.

“The bottle explosion spread to the powder inside the room, causing the ordnances to explode and start a fire. It was lucky that the firefighters took prompt action to put out the fire using two trucks, otherwise the hundreds of small ordnance, mostly grenade bombs, would have exploded even more.”