Following a brazen bank robbery in Phnom Penh last week, bankers and industry insiders have raised concerns over the security situation at financial institutions across the country.

A group of five masked men armed with guns and body armour robbed an RHB Indochina bank branch in broad daylight in the capital’s Chamkar Mon district on Thursday, successfully making off with $100,000. The national police is on the case, but the robbers are still at large.

Chea Phallarin, CEO of Amret Microfinance Institution and a board member at the Cambodia Microfinance Association, told Khmer Times the heist last week has kindled fears over the security situation in bank branches across the nation.

“We are trying not to show our concerns to the public, as to not appear weak. What the robbery shows is that all banks need to work hard to ensure their internal security is solid,” Mr Phallarin said.

“The central bank asked us recently not to use armed guards. However, we have submitted a request asking them to allow us to deploy armed guards to protect banks and microfinance institutions. We are now waiting for their response.

“If the central bank gives us permission, we will used armed guards. Without them, it is much less safe,” he added.

The National Bank of Cambodia (NBC) issued a public announcement on July 20 asking all financial institutions to refrain from using armed security guards, arguing they are not needed since the country is now peaceful and stable.

Chea Serey, director general at NBC, could not be reached for comment yesterday.

Another banker, who asked not to be named due to the sensitive nature of the situation, complained that no one has taken responsibility for the losses incurred as a result of the robbery last week.

“Only banks and microfinance institutions are affected by the central bank’s appeal not to use armed guards, and the spokesperson for the Ministry of Interior even has the bloody nerve to ask us to take care of our own businesses.

“What about jewelry shops, pawn shops, money changers, telcos and others establishments in which cash is handled? Why do they allow armed guards there if the country is as peaceful and progressive as the incompetent authorities that run it say it is? They are creating a false sense of security,” the source said.

“Someone has to be held responsible before copycats start to roam freely. The Ministry of Interior continues to delay answering our request to use security firms with armed guards and is putting the blame squarely on the private sector,” the source added.

So Kunthea, operations officer at MPA International Limited, the security firm that provided the guards at the robbed RHB branch, told Khmer Times yesterday that their employees are not allowed to bear arms. 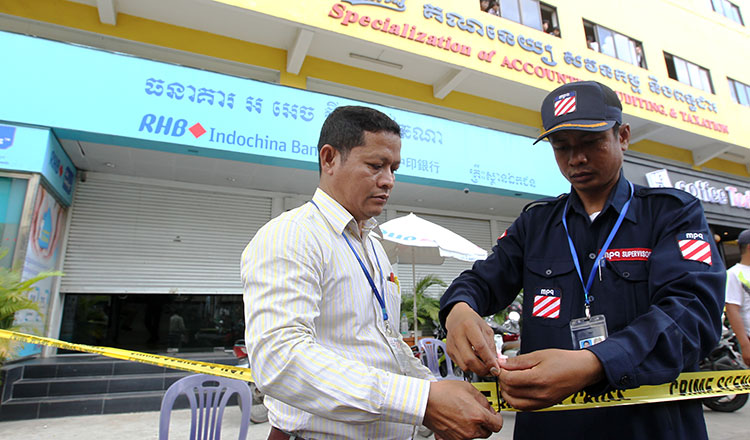 “As a private security company, by law we are not allowed to use arms while in duty. However, this could of course change if the authorities have a change of heart, in which case our guards will start carrying arms because they come from the army and have experience using them,” he said.

Stephen Higgins, managing partner at Mekong Strategic Partners, said we may start seeing more heists in the capital like the one on Thursday.

“This is the first major bank robbery here for at least a decade, so naturally that’s concerning. Based on the video footage, it’s surprising how relaxed and unhurried the robbers seemed, which raises a few questions,” he wrote.

In Channy, president and group managing director of Acleda Bank, said people should not panic over the security situation at bank branches.

“I think Cambodia has enjoyed peace and stability for its business community for a very long time, and the country will continue to be stable and peaceful, also in the banking sector.

“This is the only robbery in more than 20 years, so I see no reason to be alarmed,” he said.

“The media is saying that we are not safe. This is wrong. In fact, banks are very secure. We implement strong business continuity planning to prevent and deal with this type of events,” he said.

However, Mr Channy recommended all businesses, regardless of sector, to put strong security measures in place to protect their premises, and to take out an insurance policy. “All banks should be protected by insurance,” he said.

“You should not think that it will never happen to you. If you act carelessly, you’ll regret it. It happens all the time in countries with much higher security standards,” he said, adding that recently a bank was robbed in Texas, US, and that the criminals fled the scene with a $75,000 loot.

In the first half of 2018, in commercial banks and MDIs, deposits rose by 22 percent, reaching more than $21 billion, while loan portfolios increased by 18.8 percent, amounting to nearly $22.5 billion.

Electronic data interchange to launch at ports in 2021