Phnom Penh – Augst 24, 2018: Wing (Cambodia) Limited Specialised Bank and Mastercard today held an event to deliver grand prize to the three lucky winners who won the trip to Sentosa, Singapore, after processing payment via Wing Online Mastercard from February until end of July 2018.

Held at Hotel Cambodiana, each of the three lucky draw winners will be provided with two Silk Air economy class roundtrip tickets from Phnom Penh/Siem Reap to Singapore, two-night stay in a luxury room at Sofitel Singapore Sentosa Report & Spa, including breakfast and lunch for two, as well as a pair of Sentosa day-pass ticket.

Speaking at the awarding event, Wing Chief Executive Officer, Mr. Jojo Malolos congratulated the three winners and he hoped more and more customers will continue to support Wing Online Mastercard since Wing and Mastercard are ready to announce the second promotion, which is even more exciting.

“We are now in search for the second batch of three lucky winners, each of whom would get a chance to receive a one night stay at world-class resort – The Royal Sands Koh Rong, together with a packaged trip to/from the resort, food and dining, and helicopter riding experience around the island,” said Mr. Malolos.

To be eligible for the second grand prize lucky draw, existing or new customers should process the payment using Wing Online Mastercard from September 01 – December 30, 2018. The more transaction they process, the higher the chances of winning. The lucky draw will be conducted on January 15, 2019.

Mr. Sann Sopheap, a business owner in Kampong Cham province said he was very surprised having received a call from Wing staff saying he won the trip to Singapore because it has always been his dream to travel abroad despite the challenge in saving enough budget for it.

“As I got the information from Wing, I ran to tell my wife and she was even more shock than me. This trip means a lot to me and my wife, who is coming with me, since I can fulfill my dream without having to spend the money I save from running my small business,” said Mr. Sann, adding that he would continue to use Wing Online Mastercard in order to win another prize in the future.

For the customers who have not tried Wing Online Mastercard, they can log into Wing Money Mobile App and fill in a few information in order to create the card and they will be ready to process their online transaction and enjoy various promotion such as 12% discount for hotel booking on Agoda.com, two free rides or 50% off on 20 rides using ride-hailing app, Grab, and so much more. 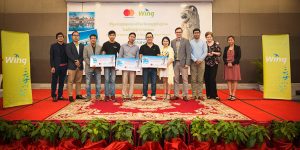 For the first 6 months after the launch of Wing Online Mastercard in Cambodia, the bank receives almost 100,000 online transactions where customers have chosen various form of payments ranging from gaming, retail shopping, dining, travelling via ride-hailing app, booking air ticket and accommodation abroad, and more.

Wing Online Mastercard gives customers the power of mobility, accessibility and secure spending- all within a few clicks on their mobile phones, opening up a new world of international shopping for even those who do not have a bank account. Wing believes that everyone should be able to experience the convenience of a Mastercard, in line with its vision of financial inclusion.

Property Investment Shall Come with A Convenient Payment