Home - Crackdown nets more than one tonne of fish

Authorities in Tboung Khmum province’s O’raing Ov district on Wednesday seized several kilometres of small-hole fishing nets, bamboo poles and more than one tonne of small fish during a crackdown on illegal fishing on Kapit lake, according to officials.

The large-scale operation was carried out by officials from the district fishery administration, provincial department of agriculture, district and commune police, and also local fishermen.

Mien commune police chief Choun Song said that the operation was one of many which are being carried out to stop off-season fishing on the lake.

“Because fishing is prohibited during this period, we often patrol the waters to check for illegal fishing,” he said. “However, whenever we see nets and poles put up the culprits always flee before we arrive.”

Mr Song added that authorities believe that the illegal nets are put up by locals and no outsiders are involved. 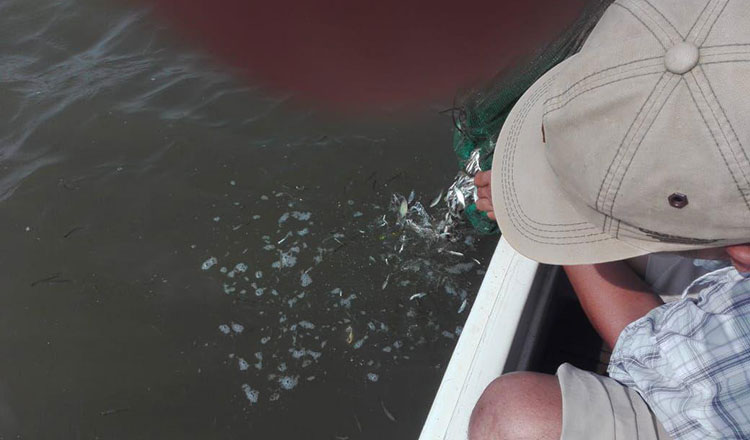 “These nets belong to people living in the area and despite being reminded not to do so, they keep fishing during the prohibited period from June till October,” he said.

Mr Song said that the type of nets seized during Wednesday’s crackdown were prohibited even during the fishing season because the holes were very small and could trap very small fish.

According to a report from the district administration and provincial police, authorities seized nearly six kilometres of nets, 2,800 bamboo poles and 1,680 kilograms of different types of small fish, which were all released back into the water.

Sun Sarath, the provincial agricultural department deputy director, said that after releasing the fish officials cut the nets into smaller pieces and burned them.