Home - Killing them softly with her voice

Ouch Savy is the female protégé of chapei master Kong Nay but in Meta House, last weekend, she showed that she was not bound by tradition when she collaborated with Norwegian pianist Ingolv Haaland and bassist Torbjorn Tveit. Sonny Inbaraj Krishnan relished the night where Khmer influences were mixed with contemporary and experimental sounds.

As Ouch Savy takes to the stage in Meta House, she tells the small audience gathered there, “I’m a Cambodian traditional singer and I also play the chapei.

“What we’re doing tonight is all new to me,” she says as she turns towards her two Norwegian collaborators – pianist Ingolv Haaland and six-string bassist Torbjorn Tveit. Savy then belts out ‘Tears No More’, a Haaland composition from the album ‘Asian Flow’, and mesmerizes the audience with her voice – leaving them nonplussed for a few seconds.

“[Ouch Savy] has insane potential, there are so many venues she can do if she wants to. We are looking into the next step. She can collaborate with anybody, she is spontaneous, the way she works in the studio, she just gets up to the microphone and does it,” Haaland tells Joe Wrigley, of the popular weekly gig guide Leng Pleng, before the Meta House concert.

“She has perfect intonation in her voice and we’ve recorded songs with just one take in the studio. And it was perfect!” says Haaland, when he tells the audience of his experiences of working with Savy on the ‘Asian Flow’ and ‘Journey’ albums.

Savy, Haaland, and Tevit also performed with backing tracks recorded with a string orchestra in Bratislava.

“The backing tracks are a compromise – I want people to experience the full sound [of the orchestra],” Haaland tells Leng Pleng before the concert.

Haaland is an associate professor in popular music at the University of Agder, Kristiansand, Norway and has been working for over a decade in Southeast Asia and The Middle East with various musical projects and recordings. He is an arranger, composer and pianist and has released five albums in his own name.

Haaland also worked as a freelance musician and musical director in Scandinavia for 16 years, working with artists such as Sarah Brightman, and a variety of symphony orchestras and theaters in Norway.

“I compose music with an Asian touch, which makes it a fusion of European and Asian music. I lived in Cambodia for a year in 2006 and have been back ever since to do musical projects and concerts,” Haaland tells Good Times2. 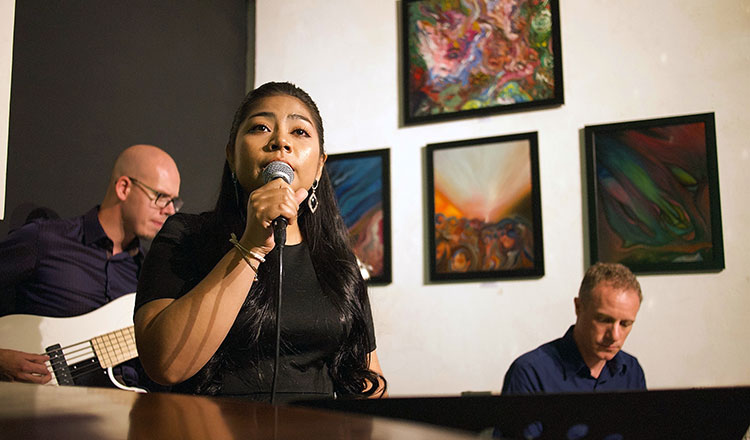 Besides Cambodia, Haaland also has his heart in Thailand and has collaborated with the College of Music, Mahidol University and worked with well-renowned and talented musician Nithitorn Hiranhankla, who plays the saw – the traditional thai violin. Hiranhankla is one of the most sought-after saw-players and has won several awards, both in Thailand and internationally.

“I have several ongoing projects there and I keep going back and forth from Norway to Thailand,” he says.

Ouch Savy is the female protégé of master chapei player Kong Nay. According to worldmusiccentral.org she is one of the new generation of chapei musicians “who are at the beginning of an emerging musical awareness that could come to rival imported karaoke and pop”.

But Savy has decided to come out of her comfort zone to collaborate with Haaland both in Cambodia and Norway.

Recalling her stint in Norway and performing with the full Ingolv Haaland and Kristiansand Symphony Orchestra on Norwegian state TV, she told the Meta House audience, “I want to put traditional and modern music together and want the world to know about Cambodia. I want to do something people haven’t heard before.” 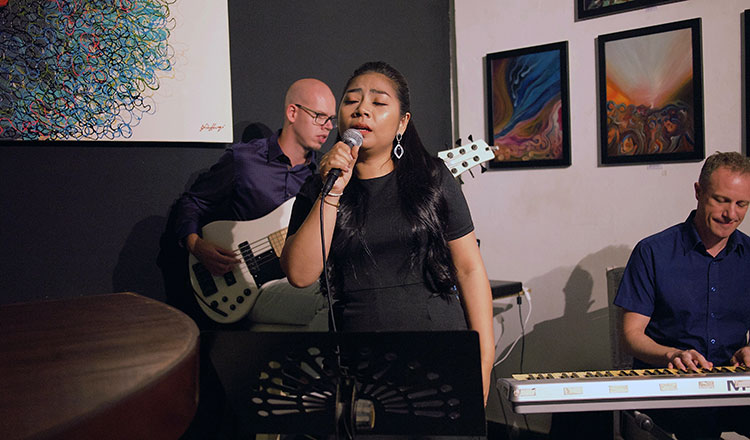 And this comes out clearly in ‘Asia Flow’ – the title track of the album – where Savy displays a style of singing that has traditional Khmer influences, mixed with something more contemporary and experimental.

Even if you don’t speak Khmer, Savy’s songs will move you and combined with Haaland’s virtuosity will take you on a musical journey. All you need to do is just close your eyes, and you’ll be there.

Finding her Higher self through music