Home - Finding her Higher self through music

Finding her Higher self through music

Cambodian-Greek-American violinist Chrysanthe Tan talks about music and life as an autistic and queer musician with Borin Sopheavuthtey and Ean Monileak.

Good Times2: Have you ever been in Cambodia before?

Chrysanthe: It is my second time visiting Cambodia. Last year I came to Cambodia to perform five or six times. The first time I came here was to perform and to see my brother. I stayed with my brother Allen Tan. He helped me set up a lot of shows because he wanted me to start performing here. I was scared to come here before because of emotional reasons; however, I was finally ready to come to my homeland last year. This year, however, I came with a volunteer group called ‘Sustainable Health Empowerment’. It is a big group of people doing a medical mission and we went to different provinces doing health fairs and medical screening and dental extraction. I’m here as a volunteer helping them out as my mom started that organization.

Good Times2: Have you been connecting with your Cambodian heritage ever since you were in the United States?

Chrysanthe: I was born and raised in America. I grew up in Long Beach, California. There are so many Cambodian people there, so it is called Cambodian Town. I did Khmer Dance there. I studied with an artist, who is now working for Cambodia Living Arts (CLA). She used to live in Long Beach. I would love to be in Cambodia part time. I would love to stay here like one or two months a year.

Good Times2: Can you share with us your work experience?

Chrysanthe: As a violinist, I’ve travelled to many countries, many states in the US and also many countries in Europe, as well as in Asia. I’ve been to Australia too. I perform with many veteran artists. I was in Ariana Grande’s world tour; we went to a lot of places. I also went on tour with Paul Anka. I perform on many recordings, concerts and TV. In America, there is a TV show called Glee; I was on that show too. On top of that, I also play music here and there, like at the MTV Music Awards, America’s Next Top Model and many others.

My career as a violinist does definitely take me to get to many places and do many different things. I’m also a composer and my own songwriter. Being on tour with other artists and doing my own music is a whole separate thing. For instance, when I was on tour with Ariana Grande, we were playing her music. For this concert tonight, it is my music. So, I get to do a mix of both – which is fun.

Good Times2: How did you to work with big popstars and tours?

Chrysanthe: Personally, I think one thing led to another thing. I live in Los Angeles which is the entertainment capital and you will never know who you’re going to meet. I worked at a restaurant and someone just randomly hired me for a tour, just one tour. They saw the videos of me playing violin on my YouTube channel. I did well on that first job, so it led to another one and I kept doing well.
The more I perform, the more people know that I could perform well and the more they would love to hire me for other things. So, the tour with Ariana Grande was a very huge show; however, before that I had already played one concert with her and prior to that I had already been on show with some other popstars. That is why they knew that they could trust me. For the tour, people would love to hire someone who has been on the tour.

So, it is all about working up your reputation. I just work up slowly like everyone else in any career. One at a time, do a good job and just wait for another one, do a good job and keep building up. During the tour, I played violin. I was the lead violinist. Also as a part of the band, I do some choreography.

Good Times2: When did you start playing violin? What got you into violin?

Chrysanthe: I have been playing violin all my life since I was a little kid, around 8 eight years old. Well, I saw people playing violin on TV since I was a little kid. I saw people playing violin on stage and I just fell in love with it. I thought it was magic. I did not understand how that sound could happen. I did not understand how the violin bow could make noise so beautiful; it was something I have never heard before and something that was so beautiful. I wanted to play it. As a little kid, I was obsessed with magic, so I thought violin was magic. Hearing the sound of violin really makes me think that it was magic. I knew I had to play it and I begged my parents to let me learn how to play it and they allowed me.

Good Times2: Are you coming from a family of artists?

Chrysanthe: No, it is just me. My dad is a doctor and my mom has been working in the education sector. She is into leadership, business and management. I am the only artist in the family. 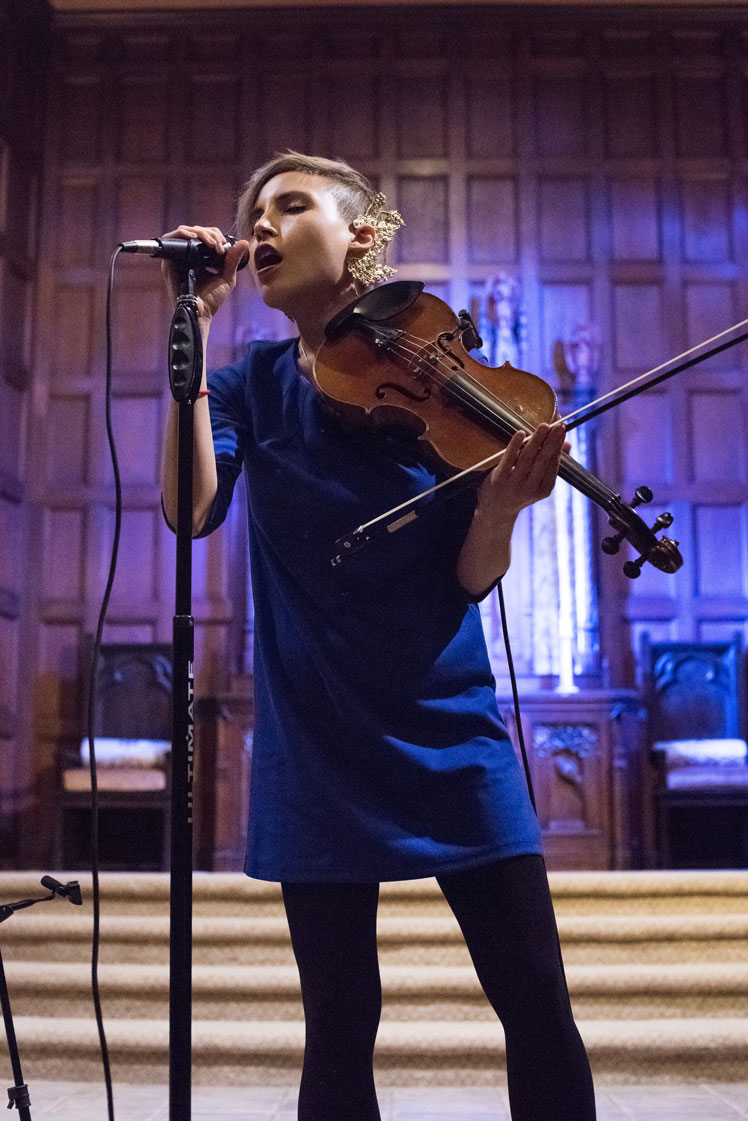 Good Times2: What is it like to be the only artist in the family?

Chrysanthe: Being the only artist in the family, I feel different. It was kind of hard, but it is better now that I am more recognized and I have more careers. However, at first before I proved myself, they were very worried. They were supportive, but worried. They kind of wished that I would do something else. I know they were scared for me; they wanted me to have a good life. I understood that but I just wanted to do what I wanted to do.

Good Times2: We heard that you were named one of the 10 LGBT artists in contemporary music. Can you tell us what it is like to be queer in an Asian family?

Chrysanthe: It gets easier, but it was very hard. It was not something that my family was very happy about when I was younger. It was because of the family honour, mainly. However, now I think my family has come a long way. It is hard. Even when I come to Cambodia, it is hard to be open as I was raised in America where it is easy to be open; sometimes, not all the time. And, I am still not sure of how much I can be myself here, yet. I came out in high school when I was a teenager. I was 16.
I faced difficulties with my family at first, but not anymore now. Both of my parents did not approve at first because they were embarrassed or ashamed; they did not want other people to know. However, I believe they understand it better now. Now they just want me to be happy and at the same time they support me as an artist. Everyone in my family has gone through some difficulties in the past 10 years, so they now see the importance of just being happy.

Good Times2: You are also autistic; does it affect your career as an artist?

Chrysanthe: Yes, it affects art, my life and my career. Being autistic, I see the world in a different way and I experience things differently. I might be more sensitive than other people with things like sound. When the music is too loud, I cannot hear what people are talking. I feel like I want to throw up because the noise is too loud. When many people are talking to me at the same time and I cannot get what they mean.

When I was very young, I couldn’t speak very well so when people talked to me; they wouldn’t expect any response. The more people talk to me, the more I shut down. However, my response would be music inside of my head and I could not convey that. People would yell at me saying ‘Why don’t you speak?’ ‘Chrysanthe say something!’ And, I would make a response to them inside of my head, but with music. I would always wish that they could just hear it and understand it, but they can’t.

That makes me think why I am a musician because music helps me find my voice. Music helps me learn how to communicate and music helps me to realize that I could connect with people because I have a hard time connecting with them. Now I feel like it is a lot easier for me to communicate; especially when I perform. I feel my music is my language.