The Environment Ministry has asked the Interior Ministry to help facilitate its World Cleanup Day event planned for next month to raise environmental protection awareness.

“I want to inform the Minister of Interior Sar Kheng that this year, the Ministry of Environment has cooperated with the GoGreen Cambodia to mark World Cleanup Day on September 15,” Mr Samal said in a statement yesterday.

“We will clean up the country by picking up rubbish along its roads, near schools, riversides and also from waterways, so please help facilitate this event for us, which is to be celebrated in provincial cities and also in districts and communes, and villages.”

“The event will encourage Cambodians to understand that rubbish pollution must be controlled,” Mr Samal added. “It will also raise awareness about the severe condition of rubbish in the world.” 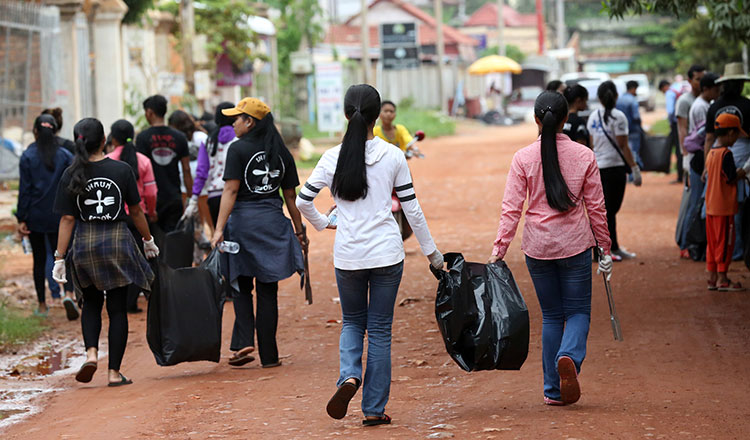 Mr Samal noted that the event will be celebrated alongside 150 other countries that have more than 380 million volunteers set to clean the world from 6 to 11am.

Samut Sothearith, director of the Preah Sihanouk provincial environment department, said he has been informed of the event by his superiors and is preparing to make it happen.

“We just got the information from the ministry this morning, and I am going to discuss it with the provincial government in order to prepare the event,” he said. “We will try our best to have full participation for the upcoming World Cleanup Day in the province.”

“The event really needs participation from local residents to be effective,” he noted. “We are often raising awareness for people living in the province because we want them to love the environment and know how to protect it.”

Earlier this year, Cambodia celebrated the Sixth National Clean City Day on February 27, when urban residents were encouraged to keep their cities clean.

Prime Minister Hun Sen said at the time that the Clean City Day was created to remind citizens to keep cities clean.

Mr Hun Sen added that the government and all people must help protect the environment in order to achieve the United Nation’s Sustainable Development Goals by 2030.