Mr Rainsy wrote a message on his Facebook page on Sunday, saying that with the Cambodian People’s Party winning a sweeping victory in the July 29 election and securing all 125 parliamentary seats, the government should release Mr Sokha.

“Maintaining Kem Sokha in jail after such a dubious victory at what was clearly a sham election, will definitely not help Hun Sen in his effort to defend what is left of his government’s legitimacy,” he said. 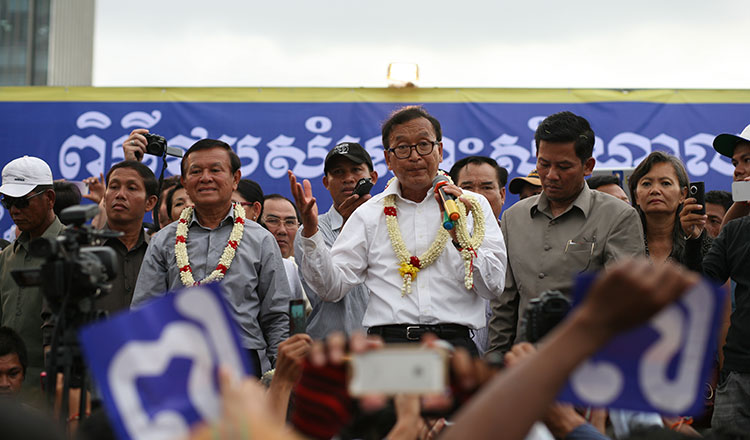 Mr Sokha was arrested on treason charges last year over comments made in a 2013 video footage from Australia-based CBN news, which showed him saying that the US government had been helping him to push

for a regime change in Cambodia.

The CNRP was then dissolved by the Supreme Court in November and its 118 senior members were barred from politics for five years.

Mr Sokha’s lawyers, Pheng Heng and Meng Sopheary could not be reached for comment yesterday.

Justice Ministry spokesman Chin Malin said that the government was unable to have Mr Sokha released because it was under the court’s jurisdiction. “The decision whether to allow him on bail or not is at the discretion of judges and the government has no power to order to have him set free,” Mr Malin said.

Meanwhile, the Supreme Court has scheduled tomorrow as a date for his bail hearing.

Ouk Kimsith, deputy general prosecutor at the Supreme Court, said the court will conduct Mr Sokha’s bail hearing, but he will not be brought to attend.

“He [Kem Sokha] will not be brought to the court because it is just a bail hearing,” Mr Kimsith said.

More than 200 unpaid workers get compensation