LONDON (Reuters) – A second successive Chelsea win under Maurizio Sarri, 3-2 over an Arsenal side who have suffered back-to-back defeats under Unai Emery, gave both managers a crash course in the unpredictability of the Premier League on Saturday.

Marcos Alonso pounced on Eden Hazard’s cross to settle the game in the second half after the visitors fought back from two down but spurned further chances.

Elsewhere, Leicester City and Everton posted their first victories, against Wolves and Southampton respectively, while the day’s other game between league newcomers Cardiff City and Newcastle United ended goalless.

That sort of scoreline was never a possibility at Stamford Bridge, where the visitors raced into the lead through Alvaro Morata and Pedro, but were lucky to go into the interval level after Arsenal squandered opportunities either side of goals from Henrikh Mkhitaryan and Alex Iwobi.

Chelsea brought Hazard off the bench midway through the second half and were rewarded when he broke free on the left and crossed for Alonso to shoot low under Petr Cech’s body.

“It is better to be on the pitch than watching on the bench, but the boys when they are playing they did well so I am just happy for the win,” Hazard said.

In the week that Spurs apologised to their supporters for further delay in their return to White Hart Lane, their victory gave a reminder of how accustomed they have grown to Wembley, with two of their England internationals leading the way after Fulham equalised Lucas Moura’s opener.

Kieran Trippier replicated his free-kick goal for England in the World Cup with another superb strike before Harry Kane rounded off an impressive win by scoring his first ever Premier League goal in August.

“It is one of those things that you can’t explain,” Kane said of his previous slow starts to seasons. “I am not silly and I know people talk about it, but it is nice to put it to bed.”

Everton also changed managers in the summer but Marco Silva has enjoyed a more promising beginning and secured a 2-1 win in his first home game with new signing Richarlison scoring his third goal in two games since his move from Watford. The Brazilian only managed five in total last season but looks a different proposition since reuniting with his former manager.

Another Brazilian, Newcastle United’s Kenedy, had a less memorable day, missing a stoppage-time penalty which would have given the 10-man visitors victory at Cardiff City, who were playing their first home Premier League game for four years.

Cardiff’s hero was keeper Neil Etheridge, who saved his second spot-kick in successive games to spark wild celebrations at the Cardiff City stadium.

Leicester also ended their 2-0 win over Wolves with 10 men after their England striker Jamie Vardy was dismissed for a reckless tackle on Matt Doherty.

The challenge that was all the more needless because Leicester were in control through a Doherty own goal and a strike from James Maddison, his first Premier League goal since his $30.6 million move from second-tier Norwich City. 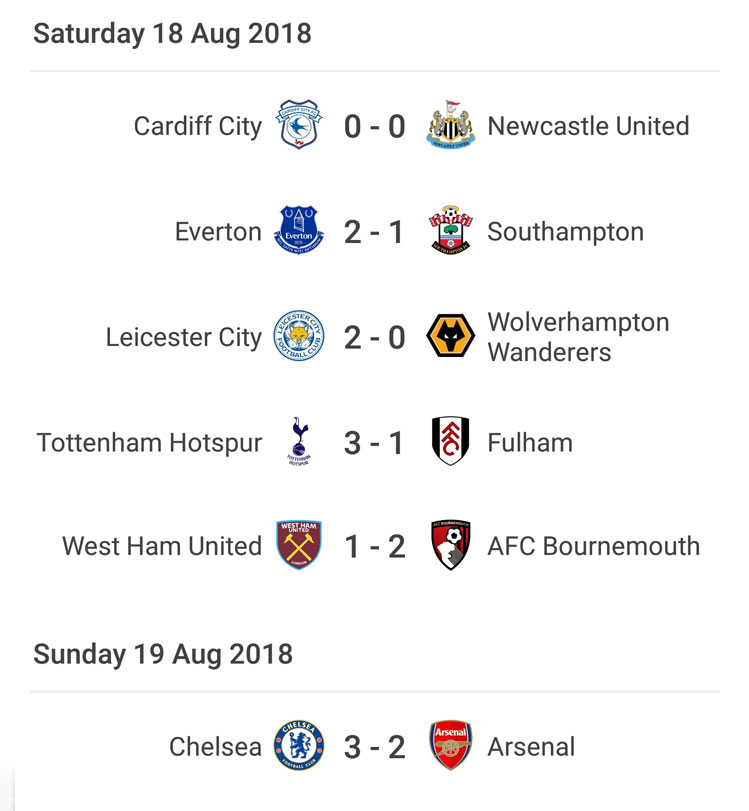 Some grumbles as Indonesia works on fixes