With the Education Ministry setting strict rules for today’s national exam, some nervous students are using prayer and superstition to bring good luck.

With incense and flowers in her hand, Bak Touk high school student Phorn Sreypich said she came to pray to calm herself down.

“I am so nervous about my exam tomorrow even though I have prepared myself by practising many exercises, asking about my techniques from seniors and reviewing lesson,” Ms Sreypich said. “I believe that I could pass the exam 100 percent because I have tried my best in Grade 12. Also, praying will make me successful.”

“People should have a real capacity to encounter university life and their job. This strict exam is a part of strengthening student capacity.”

Another student, Khan Puth Pong, said praying could calm his anxiety for the exam, but building up his own capacity was the main way to pass the exam.

“I have been putting effort in my study since the day the minister told us about the reforms to the system. I am here to ask for luck to make me more confident,” Mr Puth Pong said. “If we still have corruption and cheating in exams there will be no human development in our country.”

A bookstore vendor at Bak Touk high school, who declined to be named, said he had been stopped from selling exercise versions of the exam which had been banned by the ministry because it had led partly to cheating.

“On this Sunday morning, I saw police patrol book stores near my place. I didn’t do anything wrong so I didn’t worry,” he said.

Khat Sothy, a teacher at Prekleap high school, said that after the exam reforms students studied hard, but most suffered from anxiety.

“As an educator, I think the reform of the exam is very good, it will be much better if the ministry reforms the system at grade 9 to build their capacity from the foundation,” he added.

“It’s the fifth year of the reform of the exam and I appeal to students who are taking the exam to obey the rules,” Mr Chuon Naron said.

He said that to ensure the exam met a high standard all the time, teachers who monitor the exam must obey the law and ministry regulations. 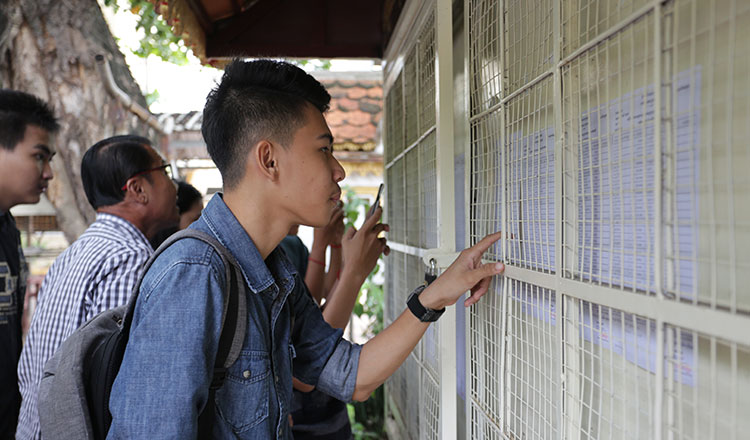 Hun Many, president of the Union of Youth Federations of Cambodia, told students on Tuesday to be well prepared for the exam.

The exam will take place today and tomorrow, with 117,061 high school students taking part, a rise from the 103,112 students last year.

The number of exam centres has also risen, from 178 to 195. The exam is divided into two groups, of which 51.7 percent is science and 48.3 percent social science.

A total of 5,000 observers will be deployed for the exam to prevent cheating and to continue the ministry reforms, the Anti-Corruption Unit said this month.

Last year there were 103,112 students on the exam list, with 63.84 percent of students passing and only 28 students automatically failing due to cheating.