A helping hand in GREEN GROWTH

To help the Cambodian government create more environmentally sustainable policies and acts that wouldn’t hinder the economic progress of the country, the Global Green Growth Institute has established a solid presence in the Kingdom. GGGI, as it is known, is an international inter-governmental organisation based in Seoul, Republic of Korea. It counts 28 members from developing and developed countries, with operations in countries all over the world. Led by former UN chief Ban Ki-moon, GGGI focuses on environmental sustainability that simultaneously targets transformational aspects of economic growth and social inclusion. Working across the 4 thematic sectors of Water and Sanitation, Sustainable Energy, Sustainable Landscapes, and Green Cities, GGGI champions green growth and climate resilience. Good Times2’s Agnes Alpuerto talks with Karolien Casaer-Diez, the new country representative of GGGI in Cambodia, and Heng Pheakdey, who leads GGGI’s urban programme.

Good Times2: How long has GGGI been present in Cambodia? What role does it play in the government’s environmental and economic policies?

Karolien: GGGI is founded in 2010 as a Korean organisation and in 2012, at the Rio+20 Summit it became an international organisation. We have 28 Member countries now and we’re growing rapidly. Cambodia is one of GGGI’s founding members. We’ve had engagements with Cambodia since 2011, initially from a distance. We’ve had a physical presence in the country since 2015. So, we’re sitting in the Ministry of Environment, Ministry of Interior and Ministry of Public Works and Transport. That’s good presence in those three key ministries.

Our programme here is focused on green urban development. We’ve been working in the city of Phnom Penh and in seven secondary cities – Siem Reap, Battambang, Sihanoukville, Kep, Kampong Cham, Bavet and Suong. We’re looking at the opportunities, challenges and solutions related to green growth.

We do policy works. We help the government find the finances it needs to propel economic growth and ensure the environment is not destroyed. We support government in its dialogue with public and private investors. In general, the money for green investment is there. But it can be hard for the private sector and the government to find each other. Government doesn’t necessarily have the experience to formulate bankable projects for private investments. And then, the private sector doesn’t always have the knowledge about government policies, demand and opportunities. By placing advisors in ministries, GGGI plays that broker role. But we don’t implement projects ourselves. We don’t build wind mills or landfills, but we find the government the money to do that.

Good Times2: How bad is the environmental degradation in Cambodian cities?

Karolien: In 2000, there were less than one million people living in Cambodian cities. Today, we’re looking at 3.5 million people and in 2030, there will be more than 8 million people in Cambodian cities. That’s more than 45 percent of the projected population by then. This population growth comes with a set of challenges because these people need services, water access, transportation, infrastructure, housing, sewers. So it’s tough for service providers to keep up with the demands of the population. With a growing urban population, you also face traffic jams and pollution.

Solid waste management provides a good example of the challenges faced by growing cities. The numbers are quite impressive. In average, an inhabitant of a Cambodian city uses 2000 plastic bags in a year. So, that’s a very high usage of plastic. And only 58 percent of the population has basic access to waste collection systems. As a result, people turn to open disposal and burning of waste, which poses serious environmental and health risks. Who suffers the most? Typically, the poor people from smaller towns have the least access to waste services. It’s the people who are already having a hard time who suffer more from these environmental problems.

Pheakdey: When consulting with the government, we identified the specific issue of the unregulated real estate development, the lack of proper zoning and the lack of green public spaces in Phnom Penh. These are mentioned in the strategic plan we’ve submitted to the local government and we provided recommendations on how these issues can be properly addressed. The government is in the process of adopting that plan. The ministries are working on it. Also, we can see that the government is trying to balance the status of the economy and the environment. There’s been a lot of initiatives from the ministries. In a developing country, it is very important to do things in very sustainable ways to ensure long-term growth.

Good Times2: How can we integrate green growth into investments?

Karolien: At GGGI, green growth doesn’t mean compromising strong economic growth. But we see to it that growth goes hand-in-hand with the sustainable use of natural resources and strong environmental approach. We even believe that it’s at the core of it. If you don’t use the natural resources in sustainable ways, you start undermining the growth. We also believe that strong economic growth goes with social inclusion and poverty reduction. It’s always about those things – economic growth, environmental preservation, social inclusion.

We’re making sustainable development plans for Phnom Penh and the other key cities. In Cambodia, the industrial sector is a very big part of the economy, 29% of GDP. The government has highlighted that they want to diversify industries to grow stronger. And the way we see ‘greening industries’ is really about that. It’s not just tackling environmental issues, it’s about economic diversification and competitiveness of exports.

We’ve done some economic modelling of the industrial sector. We look in particular at Small and Medium Sized Enterprises in garments, food, electronics, and bricks. And we’ve looked at their usage of resources – such as material, labour, energy, water. There are really so many opportunities in these industries to make more efficient use of the natural resources, to preserve the environment and increase of their productivity at the same time. We estimate that better resource efficiency in these industrial sub-sectors can create 500 000 new jobs by 2030. 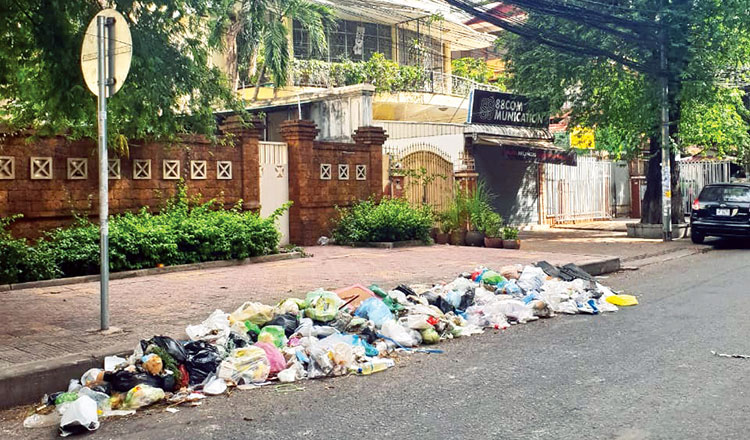 What sets GGGI apart is that we look at the synergies between economic growth, environmental preservation and social inclusion. It’s approaching greening as a business opportunity, rather than a constraint to a business boom. We typically look at policies and investments and how those two can go together. We work with ministries on strengthening policies, to allow for green approach, to allow for stronger green investments. We work with them to identify projects, right financial mechanisms, potential investors and donors. We look at how public money can be used to make a project more attractive.

Karolien: Yes, they are. I think when you introduce the green growth approach to the people, they will understand. It’s not just for the sake of the environment but when you show them that the environment is a business opportunity, I think people will take interest in it. They’d think that this can improve their businesses. So it’s really hard to say no to that. It’s a very interesting one. And considering that Cambodia is our founding member, we can say that the government firmly supports this idea of green investments.

When we came here, we had a lot of discussions with the government about what we do and what we can help. It’s always a dialogue between us and them. We come in as advisers, we sit in and see the challenges being faced by Cambodia. It’s never a confrontational approach; more of an advisory service. So far, everyone’s very open about what we offer and we can see positive results over the years.

Good Times2: What will happen to businesses – plastic makers, for example – that will be affected by the ‘green growth’? 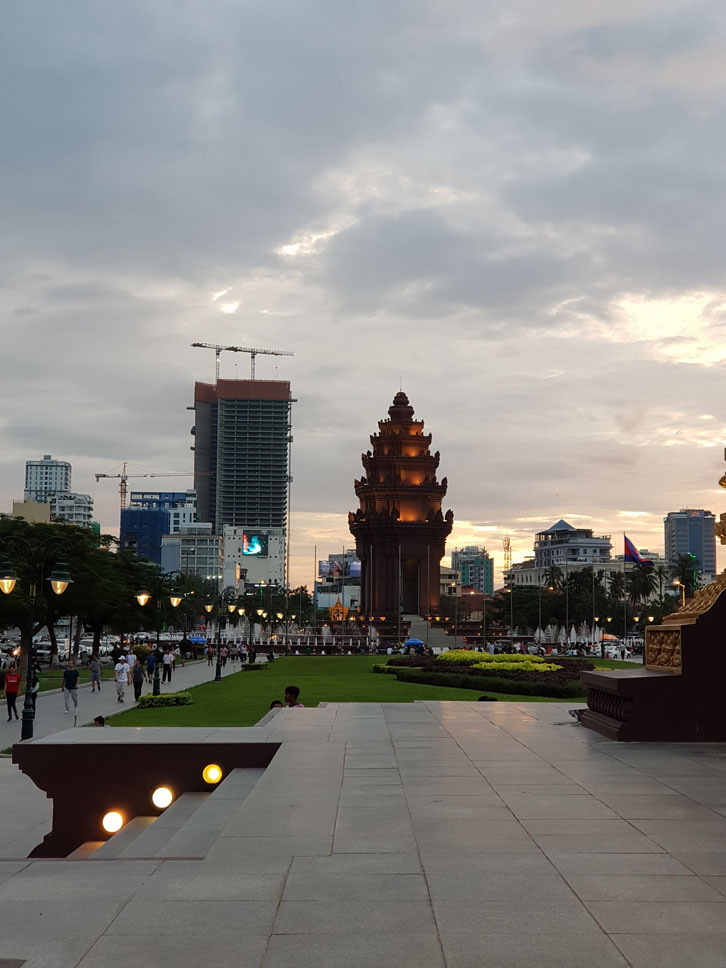 Karolien: I think those type of businesses will find ways to adjust. It’s always like that. If they jump to new technologies and start producing plastic bags from sustainable and eco-friendly materials, they can see that there’s a big opportunity there. In Colombia, for example, GGGI is working with the government on a bio-economy strategy and exploring how they could produce plastic from corn, bamboo or grasses. In Vietnam, we support government in turning waste into energy.

To give another example, there’s an annual 5 percent job growth eglobally in the renewable energy sector, while job creation in the oil and gas industry is decreasing . People are shifting jobs along with the shifting of industries. Thanks to innovation for making it possible. Jobs are becoming greener. We always adjust, you know, that how things go especially for businesses.

Pheakdey: Industries, in a way, have to adapt to these changes. When consumers opt to buy greener products, plastic makers and other producers will need to change as well. We’re all innovating to meet the demands of the people and making sure the business don’t die. If we’re concerned about people losing jobs because of the environment-friendly implementations, that’s not going to happen. New jobs will be created, in fact. Entrepreneurs will move from their old industry to a greener one. It’s not about taking out employment, but moving people into greener jobs.

Good Times2: Cambodia is still in the process of forming a new government after last month’s elections. Will there be adjustments or changes in the way you work in the country?

Karolien: Changing governments isn’t new to the organisation. We always work with a government and then when it changes after a couple of years, we work with the new one. It’s our job to bring in new people on board, to reintroduce what GGGI is, and then bridge the gap between stakeholders and the government to green projects that we can all work on. We have to maintain the momentum of the projects we’ve already started even if the government has changed.

Pheakdey: We are very fortunate to have worked with a government open to our approach. The ministries have been supportive. With the formation of new governments, there’s always a risk. It really depends on the vision and the initiative of the new leaders whether they see common goals that we are aiming for. But we have high hopes that we will still be coordinating closely and we can all agree that we need to address the key issues affecting Cambodia’s economy and environment. It will take more time if the leadership changes, but we will get by.

Food for the hungry: crickets

Tips on adopting a pet