Under the yellow light inside the Cloud – an intimate place filled with artistic pieces and isotonic drinks – last Saturday evening, a mixture of poets, musicians, writers and storytellers from various nations gathered for an event called “Nook for Rhyme Crooks – Open Mic Spoken Word”.

The air was thick with excitement from the audience and the performers, each giving everyone a nod and a smile as they all knew it was going to be a creatively beautiful night. Spoken word artists prepared for their performances, letting their poems about feminism, relationships, family and love be heard clearly and loudly. Poets from Nepal, England, Saudi Arabia and Cambodia took the elevated platform and showered the eager audience with their creative words.

One of the artists, British national Jessica Sinclair, said that it was through a Facebook post that she knew about the open mic event. She gamely offered her romantic stories and experiences through spoken word. She shared that she has been passionate about writing poetry and short stories since childhood and developed her talent over the years. She used to be fond of writing dark-themed poetry, but later changed to lighter, happier notes when she joined spoken word events.

“A couple of years ago, I went to my first spoken word event. I fell in love with it, the writing and the reading particularly. I was inspired to write a lot more since,” she said.

“It is really liberating to write. It is a way of expressing myself and make myself be connected to my real identity.”

Having stayed in the Kingdom for eleven months now, Jessica said she has learned to understand and accept the differences in culture and lifestyle of Cambodians. She said she is inspired to write literary pieces about her life in the Southeast Asian country soon.

“Cambodia is a really fascinating country. People are really enthusiastic. There are great differences from what I used to see in the UK, of course. But this country has its own colours and beauty.”

A Nook for Rhyme Crooks was made possible by the collaboration of American poet Jessica Austin and Cambodian poet Yeng Chheangly. A week before the poetry reading night, they also initiated poetry writing workshop.

Jessica said that the poetry night was originally developed by her friend, Tai Mesches, who has organised the same event in China, Taiwan and New York City.

“This spoken artist came to Cambodia and hosted poetry night in the early 2017 at Cloud. Before he moved back, he asked me to keep the event going. As it is also my passion, I then collaborated with Mr Chheangly to make sure that Khmer voices will be heard in public with a little help of translation for those who don’t understand the local language,” said Jessica, a teacher at University of Puthisastra’s English Programme.

Jessica and Cheangly are set, utilize some hour of their free weekend, to do a monthly writing workshop for aspiring poets – locals and foreigners. Jessica explained that it is very important for poets to have a platform where they can voice out their ideas about things and life in general. The poetry and stories deserve recognition not only because they’re done creatively, but because they have deep messages that touch people’s lives.

The concept of mixing Khmer and foreign poets will also help bridge differences in languages and cultures. With the help of a translator, local poets will be inspired to write more poems and stories using their own ways, language as well as a foreign language.

Aside from being a fulltime writer of a company, Chheangly feels tireless to collaborate and translate for Khmer poets who want to express themselves in English. He has been working and writing for years, always giving time for his passion despite his tight schedule.

“I want all Khmer writers and poets to have a place to come and share their perspectives and stories in front of a mixed audience. A place that will also enable them to listen to and learn different styles of expressing themselves, It is just like what we used to do with our Slap Paka Khmer’s event. We, writers/poets come together under one roof and hear each other” said Chheangly.

Working on this literary journey, Mr Chheangly believes that Khmer poets can expose themselves into liberal and contemporary styles of writing if they continue join events such as poetry nights. He shared that learning these things does not mean a Khmer poet is moving away from his roots, history and traditions. 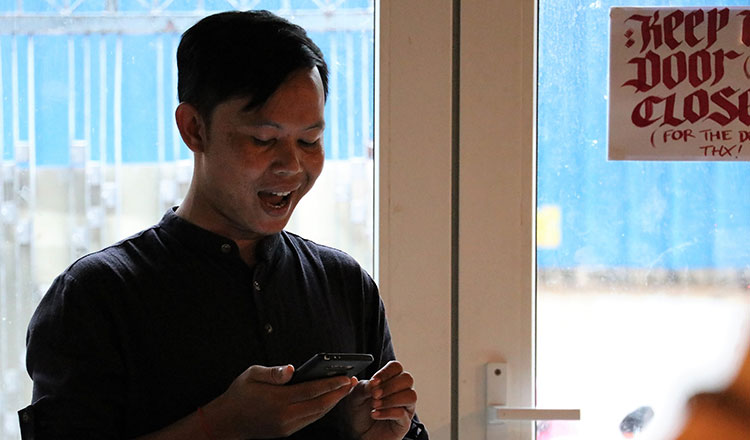 Mr Chheangly considers A Nook for Rhyme Crooks Phnom Penh as a significant move to introduce spoken word and free verse poem to Khmers. Though last week’s event was participated mainly by foreigners, he thinks more and more Khmer poets will know that such event exists and they will be engrossed to join. He added that opportunities such as A Nook for Rhyme Crooks will lead to more creativity and confidence among the participants.

Tonight, there will be another spoken word event centred on feminism at the Cloud from 7pm onwards.

Dealing with the ‘silent killer’