Speaking during a meeting with garment factory workers yesterday, Mr Hun Sen said that the hacker also vandalised the Facebook page of the National Election Committee.

“They could not do anything else, so they hacked Hun Sen’s Facebook page. I hope the world will punish this cybercriminal,” he said.

He then claimed that the National Police is now working with Interpol to look into the hacking allegation.

“We already know who did it. The hacker [Mr Rainsy] is the one who complained about me on Facebook,” he said. 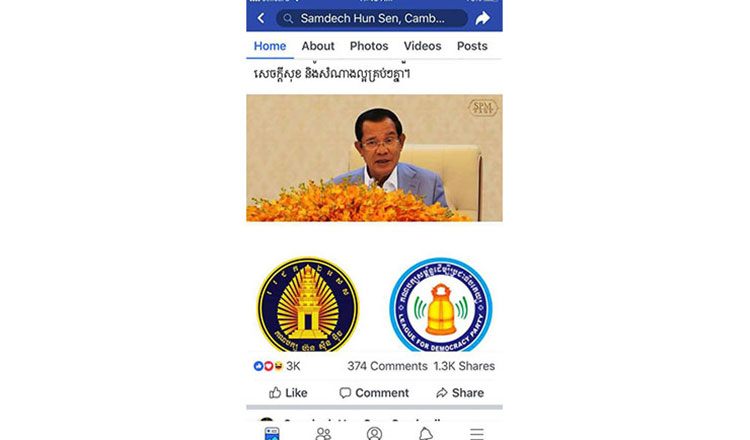 Last week, the Facebook account posted that the CPP will share its seats with Funcinpec and the League for Democratic Party in order to promote democracy in Cambodia, Mr Hun Sen said.

The alleged hacker also deleted posts that received international attention from countries like Indonesia and India, he added.

“He is stupid for doing this,” he said. “These are the things he said – and now he posted it on our Facebook page.”

On Monday, Mr Rainsy said that smaller parties were to be given National Assembly seats and accused Mr Hun Sen of ordering NEC president Sik Bun Hok to revise its preliminary figures to distribute seats to Funcinpec and LDP.

Responding to the allegation, Mr Rainsy said that no one hacked Mr Hun Sen’s Facebook page.

“He just mistakenly posted his statement too quickly and now he regrets it,” he said. “But it’s impossible to swallow once you spit it out.”

Interior Ministry spokesman General Khieu Sopheak could not elaborate on the hacking in detail, but said that the ministry is investigating the matter.

Budget boosts for health and education