Prime Minister Hun Sen yesterday said the government has spent $22 million on missing wages for factory workers as it continues to side with them in cases where employers have closed shop and fled.

He added hat the government has also forced factory owners to pay indemnity in order to avoid problems should they flee.

“The government has spent a lot of money – totalling to $22 million for saving workers,” Mr Hun Sen said as he addressed thousands of garment workers in the capital’s Sen Sok district. “That’s why the government demanded for the indemnity.”

Mr Hun Sen added that companies must take care of their workers and ensure good working environments for them.

Mr Hun Sen also addressed a recent factory worker protest in Svay Rieng province, where about 1,500 staged a walkout after claiming the lamp factory had docked their wages for days taken off to vote in the national election last month. 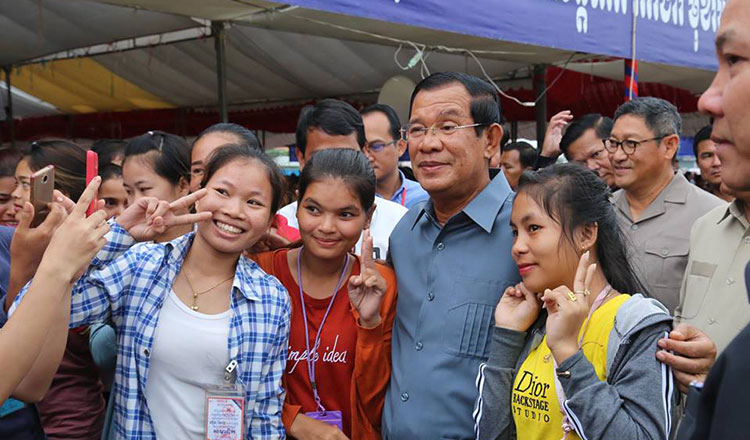 He said that factory workers are susceptible to false rumours instigated by parties motivated by their own interests.

“In fact, this was a case of provocation in order to make workers protest against the company,” Mr Hun Sen said. “The company did not cut their wages.” Mr Hun Sen said that the workers’ wages were never actually cut for taking time off to vote in their respective provinces during the election. He said workers were falsely led to believe a rumour.

During the strike, the protesting workers did not only demand for their cut wages, but also for improved working conditions, noting that the factory has in the past fired workers without transparency and failed to respect the rights of pregnant workers.

Has Bunthy, director of the provincial labour department, said that the workers had many demands, and the Sheng Yao factory met them all.

“In their letter, they wanted their wages. The authorities had already found a solution with the company,” Mr Bunthy said. “The workers promised to come back to work.”