Police in Kratie province yesterday began questioning three more people in connection to a shocking murder case in which a family of four was killed.

The case was initially thought to be a tragic accident after the charred bodies of the family were found in the ashes of their home on Thursday.

However, police found bullet casings in the ashes as well and began an investigation which has since revealed that neighbours heard gunshots on the night of the fire last week, leading to the arrest of four suspects on Monday.

Yesterday, three more people were brought in for questioning – including the former owner of the family’s land who had a dispute with them – as police continue to unravel the gruesome case.

Thmey commune police chief Cheam Chankomar said the three people were being questioned at the provincial police station, but stopped short of labelling them suspects.

“I have sent three people to be questioned,” he said. “Two villagers are neighbours and the last one is the former land owner who sold the land to the family.” 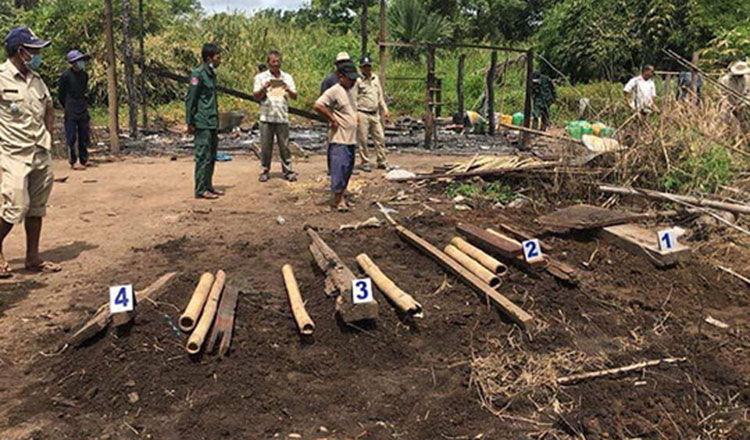 Mr Chankomar declined to identify the three people, but noted that the previous land owner had a minor dispute with the family in the past.

“We have little clues in this case because the family had just moved to the area,” he said. “They never had any arguments with anyone in the village, just that small dispute with the previous land owner.”

“We are still not able to conclude anything because the investigation is ongoing,” he added.

The four victims were identified as Chhum Chean, 30, his wife Chuon Sokneang, 36, and their children, an 11 year-old son and nine-year-old daughter.

General Kirth Chantharith, spokesman for the National Police, yesterday said that more suspects have been identified and police are looking to make further arrests.

“We have their identities and our police forces are working hard,” Mr Chantharith said. “I don’t want to reveal any more because it could impact the investigation.”