Suspects held over murder of family

Police in Kratie province yesterday arrested four suspects over the brutal murder of a family of four in Chet Borei district, where their charred bodies were found in the ashes of their home.

Deputy provincial Governor Pen Lynat said that provincial police detained four suspects in the case, which was initially thought to be a tragic accident but has since been opened as a murder investigation after bullet casings were found in the ashes.

“They are just suspects and right now police are questioning them,” Mr Lynat said, noting they are being held at the provincial police station.

Mr Lynat added that the family’s home was burned down with them inside in order to conceal evidence. It is not yet clear how the family was killed, or if any members were alive when the house was set aflame.

“Four suspects have been detained for questioning,” he said. “Ask provincial police for more details because I am continuing work at the scene.”

“All are suspected of being involved in the premeditated murder committed on August 9,” the report noted.

Chet Borei district Governor Hang Chandy said on Sunday that the family was initially thought to have died in the inferno that engulfed their home on Thursday night at about 11pm in Thmei commune. 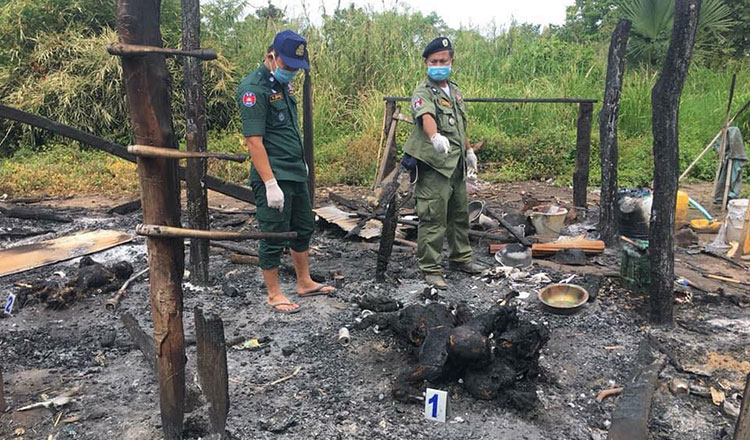 But Mr Chandy noted that upon closer inspection, bullet casings were found at the scene, promoting a murder investigation which has revealed that neighbours of the victims heard gunshots on the night of the blaze.

“When our officials went to the scene, we saw four charred bodies in the house which was completely burned down,” Mr Chandy said. “Officials believe the family was targeted in a revenge killing because villagers heard gunfire.”

The four victims were identified as Chhum Chhean, 30, his wife Chuon Sokneang, 36, and their children, an 11 year-old son and nine-year-old daughter.

Mr Chandy said yesterday that provincial police and military police have cooperated on the investigation and worked together to arrest the four suspect late on Sunday night in Thmei commune’s Ba’ear village.

“We can’t give any details yet because experts are working on the case,” Mr Chanday said.

Stock of timber seized in Ratanakkiri