Political parties yesterday offered mixed reactions to the preliminary election result released by the National Election Committee over the weekend, which showed a resounding victory for the ruling CPP.

CPP spokesman Sok Eysan said the party was extremely proud of the huge amount of votes that it secured.

“Voters saw the CPP’s platform as the right choice and now it’s all about national benefits for the people,” Mr Eysan said.

The Cambodian Nationality Party, Republican Democratic Party, Khmer United Party, Our Motherland Party and Khmer Economic Development Party said that they accepted the results and respected the will of voters.

Funcinpec party spokesman Nhep Bunchin refused to comment, noting that he preferred to wait for the official results.

But during an interview with Khmer Times last week, Funcinpec’s deputy secretary-general Phan Sothy said the party would accept the result.

“If you ask if Funcinpec will accept the result, I would say we would not have joined the contest if we disagreed with the result published by the NEC,” Mr Sothy said.

LDP president Khem Veasna and his spokesman could not be reached for comment yesterday. 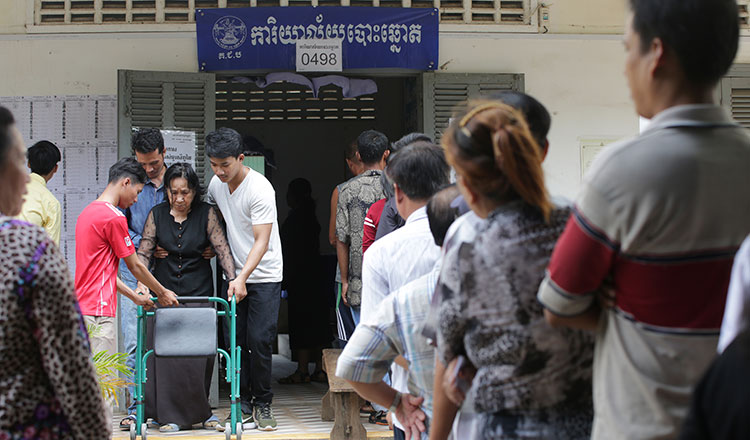 “We could not clarify if the figure of the election turnout is true because we did not have enough observers to deploy. One good thing is that the environment was safe. But whether it’s a sham, I dare not make a comment,” Mr Inn said.

Cambodian Youth Party president Pich Sros said he will file a complaint for a recount of ballots because he believed voter turnout for the CYP was higher than the NEC’s reported.

Hing Yoeun, deputy president of the Khmer Will Party, accused the ruling CPP of using intimidation against voters.

“KWP will not accept the result because we think that the turnout is not true because we observed the polling stations and not many voters showed up and some reported to have been threatened and told to vote for the CPP,” Mr Yoeun said.

Khmer Anti-Poverty president Daran Kravanh on Friday demanded a new election be held, claiming that last month’s poll was rigged. He requested a re-election brokered by the international community.

“The government did not value people’s hope as an important factor. The election is nothing but a betrayal of the people’s will,” he said.

NEC deputy secretary-general Som Sorida yesterday said the NEC has yet to receive any complaints related to the announcement of the preliminary results.

“Anyone who wishes to file complaints must offer supporting evidence. They can file complaints to reject the election results but they cannot request a re-election or recounting of the ballots,” Mr Sorida said.

The NEC is scheduled to announce its official election results on Wednesday.