Death toll from floods rises to 15

The number of dead from weeks of flooding across the country has risen to 15, the National Committee for Disaster Management said yesterday.

“Up to now, a total of 15 people have died from the floods that have struck some provinces very seriously,” he said.

Mr Vy said that floods have affected 228 communes across the country, leading to 5,660 families being evacuated to 53 different shelters. More than 24,000 animals were also evacuated and 28,171 hectares of rice paddy were flooded, he said, adding that 194 schools have also been affected.

“Nine people drowned [here] while 22 other people have been injured. The authorities should continue to aid flood victims directly,” he said. “I feel a little bit tired and the work was a little bit hard, but I am happy to help the people.” 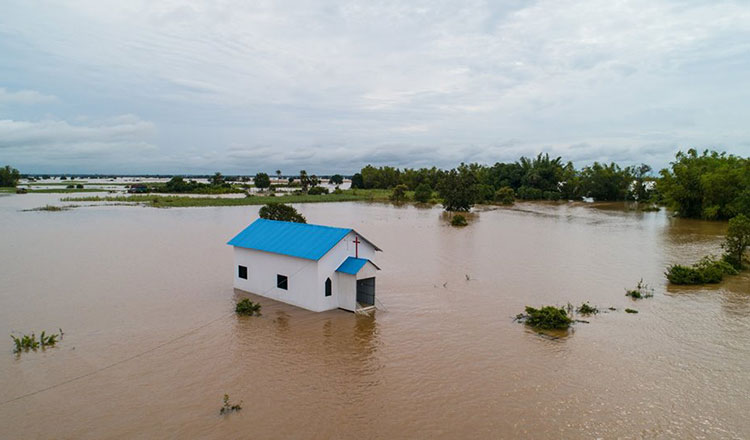 In Kratie, provincial Governor Va Thorn said on Saturday that flood water was affecting National Road 73, forcing some vehicles to be banned from its use.

Mr Thorn said that all vehicles weighing more than ten tonnes should avoid the road and find an alternative route.

“Starting on Sunday [yesterday], the administration is asking owners of vehicles over ten tonnes to not travel on these roads temporarily until flood water has receded,” he said.

Stung Treng provincial Governor Mom Saroeun said on Saturday that officials there are ready to provide assistance as needed.

“The government is ready to put in effort to intervene on behalf of the victims,” Mr Saroeun said. “We will help evacuate, provide food and clean water, and also provide money to those suffering.”

During a meet with residents, Ms Rany urged local and international donors to continue to support flood victims.

“The CRC is asking for local and international organisations to help support flood victims,” she said. “The CRC will also donate to those affected.”

Docked election wages to be paid