The royalist Funcinpec party has vowed to iron out its party’s years-long infighting and get its leadership reformed in a move to buttress its popularity after preliminary election results placed it second behind the ruling CPP.

During a discussion organised by Khmer Times yesterday, Funcinpec’s deputy secretary-general Phan Sothy said that the party failed to secure a single parliamentary seat last month due to infighting and problematic leadership.

Mr Sothy said the party’s supporters and seats in the National Assembly have gradually declined over the national elections in 2003, 2008 and 2013.

However, the party placed second in terms of nationwide votes during the election last month, a sign that it can rebound before the next election in five years if it reforms itself.

During last month’s election campaign, Party president Prince Norodom Ranriddh was absent as he underwent medical treatment at a hospital in Thailand following a fatal car crash that killed his wife on June 17.

Mr Sothy said that the prince’s absence hampered the party’s showing in the national election.

“We believe that no one can replace Prince Norodom Ranariddh as Funcinpec party leader. We trust his intelligence. Although he is 72-years-old this year, I think that he is a strong leader,” Mr Sothy said. “We held a meeting recently and supported him to remain party leader.”

“He gets better from day-to-day. We told him that Funcinpec received more votes compared to last election but we are still waiting for the official results,” he said.

“Funcinpec’s team leader is now trying to find ways to solve the conflicts because what happened earlier, we assumed that we were partly wrong. So we do not want any complaints against each other between our current members and former members. Funcinpec will also make further reform for the next general election,” Mr Sothy added.

Mr Sothy said that Funcinpec will accept the election results regardless of some critics saying the election was neither free nor fair.

“If you ask if Funcinpec will accept the result, I would say we would not have joined the contest if we disagreed,” he said. “We will accept it and move on.”

You Hockry, Funcinpec’s vice president, on Tuesday issued a statement to inform party members that the party secured 373,526 votes, ranking it second behind the CPP which garnered about 4.8 million votes.

On the same day, Meach Samroul, an ousted member of Funcinpec, filed a lawsuit to Phnom Penh Municipal Court accusing deputy party president Por Bun Sreu and secretary-general Yim Savy of conspiring to strip him of his party membership.

Mr Samroul said that he asked for $100,000 in compensation over his sacking.

“I have scarified myself for the party over last decades. I do not want those bad people to live happily. That’s why I just filed another complaint to the court,” he said. 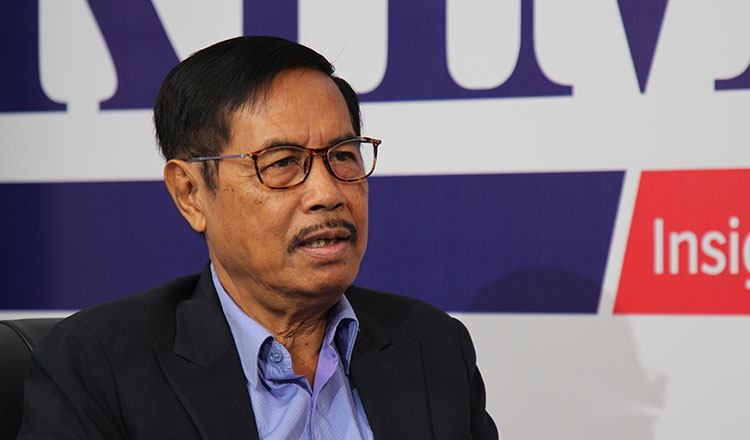 Mr Bun Sreu and Mr Savy could not be reached for comment yesterday.

Mr Samroul, a former head of Funcinpec in Banteay Meanchey province, was stripped of party membership along with other six members in January.

Their dismissals came after an intra-party conflict that centred on a petition to fire Mr Bun Sreu and Mr Savy. The letter was addressed to Prince Ranariddh and accused the two of nepotism and inability to lead the party.

On February 12, the seven ousted Funcinpec members filed a lawsuit to the municipal court to demand the court issue an injunction to reinstate their party memberships, but it dropped the case in March claiming it was not under its jurisdiction.

“The case was over. Why did he [Samroul] bring it back again? No one faked the documents,” Mr Bunchin said.