More than a dozen families in Ratanakkiri province’s O’Yadav district were yesterday evicted from the premises of the Seima Sovankiri pagoda in Pate commune following a complaint filed by the chief monk stating that an increase in their population had disturbed public order.

Chhay Thi, Pate commune chief, said yesterday that the families, all vendors, were previously warned and had been given seven days to vacate.

“The authorities already appealed to people to not to live or sell their goods here because the land belongs to the pagoda,” he said. “Their presence affects the environment and public order.”

Venerable Leat Bunlong, chief monk of Seima Sovankiri Pagoda, said that at first there were only one or two families selling food and beverages in the morning.

But the number ballooned to more than a dozen, with some families deciding to settle on temple grounds, he added.

He said that they were previously tolerated, but things took a turn for the worse when vendors began obstructing public order.

“Before, they came here to sell during the day and went home at night, but after a while, many of them started building houses here,” he said. “They shout, they’re not hygienic and they cause chaos.” 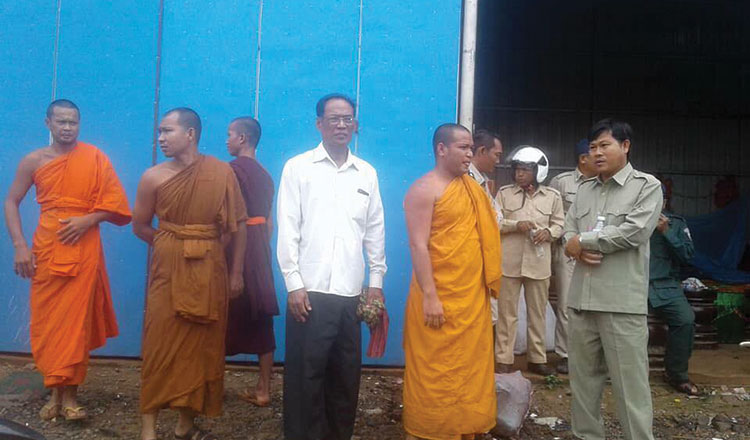 “The pagoda is a quiet place and they encroached upon pagoda land illegally,” he added. “If the pagoda didn’t complain, the future would see more of these families coming here to encroach on the land.”

Leng Srey Pov, a 42-year-old vendor, said that most vendors agreed to vacate, and that there were no physical altercations between vendors and authorities during the eviction.

“Most of the villagers understood and they agreed to move without making any problems,” she said.