The number of weather related deaths across the country rose to eight as provincial authorities scrambled to evacuate residents and prevent crops from being destroyed by floods and droughts this week.

Keo Vy, spokesman for the National Committee for Disaster Management, said yesterday that the eight victims died during floods in three provinces, including Stung Treng, Kratie and Kampong Cham.

Authorities managed to evacuate a total of 4,959 families to 53 different camps across the five provinces, he said, noting a total of 15 houses, 142 schools and about 80 pagodas were affected by the floods.

Mr Vy added that Battambang and Prey Veng provinces were battling droughts, which damaged about 14,000 hectares of rice paddy.

“Some could be saved because some plantations have a water system, but that’s not the case for every paddy,” Mr Vy said. “The drought happens every year and we lack a water system.” 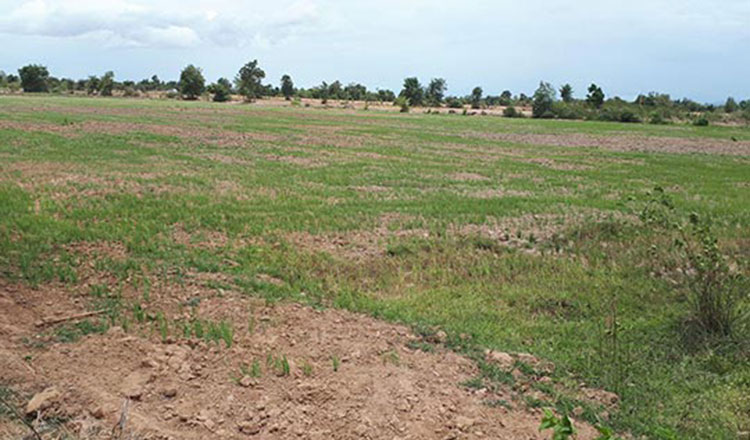 Chhim Vichara, director of the Battambang agriculture department, said the province has been battling both floods and drought in different areas.

He said a total of 2,796 hectares of crops were destroyed by recent floods in Mong Russei, Sangke, Ek Phnom, Bavel and Thmar Koul districts in Battambang province.

“While others face floods, we’re facing a drought in Kors Kralor district,” he said. “There’s always a drought around this time of the year.”

He added that last year, about 9,000 hectares of rice were affected by drought in Battambang province. He said that villagers are appealing to authorities to support their farming by supplying water to feed their crops.

“The farmers aren’t planting rice so we suggest that the authorities come up with a plan because this area is not fertile any more,” Mr Vichara said.

“Those rice paddies are facing damages because of the lack of water,” a Provincial Hall statement said. “Now the local authorities are trying to pump in water to reduce the damages.”

United Kingdom to aid demining until 2020