The National Election Committee yesterday said it found no irregularities in the national election results after finalising tallies submitted from the province and capital.

The NEC issued a statement yesterday saying that its working groups reviewed and verified all results and found no mistakes over the election results nationwide.

“The working groups were reviewing and verifying the results, but found no mistakes over the election results that were reported from the capital and provinces,” it said.

The NEC said that it had a mechanism to recheck the results thoroughly to avoid confusion, which could lead to a loss of trust in the election. The NEC split into five groups to check and verify the tallies provided.

“We found no mistakes or irregularities, including on the figures of voter turnout, and valid and invalid ballots as well,” NEC spokesman Hang Puthea said. “We were reviewing it for accurate ballot counting because the first counting of ballots was conducted at polling stations. After that, we found no irregularity that will impact the results of the election.”

Preliminary results from the NEC show a voter turnout rate of 82.89 percent, with the CPP securing 76.78 percent of votes nationwide.

Two political parties, the Khmer Anti-Poverty Party and the Khmer Economic Development Party, have refused to accept the results.

Sin Sovannarith, secretary-general of Khmer Anti-Poverty Party, said that his party could not accept the NEC’s statement and will issue its own statement to reject the results of election as neither free nor fair.

“The Khmer Anti-Poverty Party cannot accept that there was no irregularity,” Mr Sovannarith said.

He said that he noticed irregularities, such as local authorities forcing people to cast ballots and empty polling stations where a high voter turnout was recorded.

“There were a lot of [irregularities] at polling stations. At my polling station in Kandal province, at about 8 to 9am in the morning, people lined up in one line to vote but if we compared it to the 2013 election, there were seven lines of people to cast their ballots,” he said. 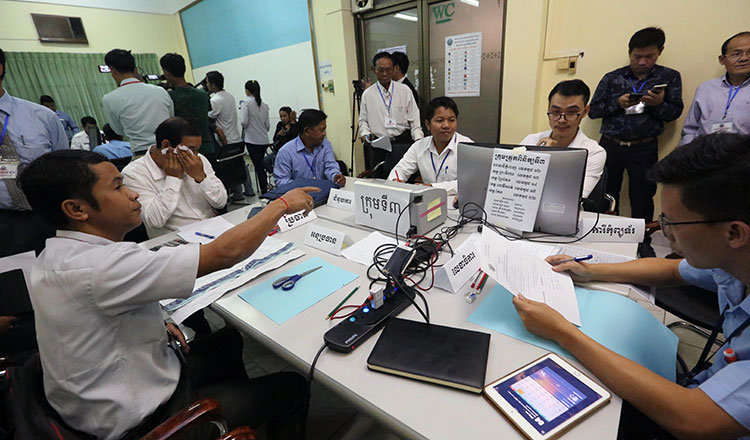 Mr Puthea said that any political party that refused to accept the results of election would violate a contract signed with the NEC.

“It is their opinion, but before they applied to take part in the election, they signed ten points with a promise to accept the election results and if they reject the results, they have to face their contract,” Mr Puthea said.

Former opposition leader Sam Rainsy this week called for the NEC to recount the ballots.

Mr Puthea said that Mr Rainsy had no say because he represented no party contesting the July 29 election.

“Based on legal aspects, the NEC cannot listen to him,” he said. “Firstly, he is a prisoner. Secondly, he does not represent any political party that contested the election. He has no right to ask for recounts.”

The NEC has received 2,525 election complaints nationwide, most of them from the League for Democracy Party over how ballots were marked, and is expected to solve all of them before it announces the election results.

Results are scheduled to be announced on August 11.