The Cambodian Mine Action Center has begun searching for and removing unexploded ordnances left behind from a dispute between Cambodia and Thailand over the Preah Vihear Temple complex in 2008.

Hok Heng, a Preah Vihear provincial police spokesman, said yesterday that police are working closely with CMAC to locate explosives in the area.

“Bomb defusing experts are dealing with the problem,” he said. “The Choam Ksan district authority reported the matter to us and then to CMAC officials to come to remove them.”

“CMAC officers are still being deployed there to remove them,” he added.

Mr Heng could not give the exact number of ordnances found so far and said experts are still searching the area.

“The site is about three kilometres from the Preah Vihear Temple. Villagers came across the ordnances and reported the matter to the local authority,” he said.

CMAC director-general Heng Ratana wrote on his Facebook page that cluster bombs were left over from the 2008 dispute and that they can remain active for a period of ten years. 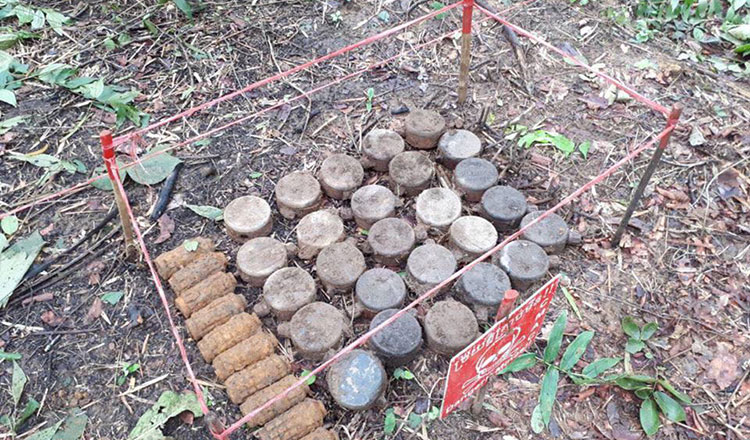 “[We] have so far found some 155mm cluster bombs which were left behind in the area from the conflict,” he said. “Their use was also brought up during the Cambodian government’s lawsuit in the International Court of Justice over the Thai incursion.”

“These shells will still be in good condition for up to ten years. Cluster bombs explode in the air and emit 68 smaller shells. Each shell will spray 260 pieces of shrapnel over a wide area before hitting the ground,” he added.

Mr Ratana said that CMAC is removing the ordnances under a project supported by the Chinese government.