The Japanese Foreign Minister has expressed concern over Cambodia’s national election after the number of invalid ballots spiked when compared to the 2013 election.

Foreign Minister Taro Kono met with his counterpart Prak Sokhonn on Saturday in Singapore when they attended the Foreign Minsters’ Meetings on East Asia Cooperation.

Mr Kono reportedly said that he was disappointed over the election, noting it had a lot of invalid ballots.

“The results were disappointing in many ways as many of the ballots were judged invalid, even though Japan had given its support to ensure that the poll would reflect the will of the voters,” Mr Kono was quoted by news organisation NHK as saying.

He also urged the Cambodian government to further democratise its political process by creating an environment for dialogue with opposition parties, according to NHK.

Preliminary results from the National Election Committee show a voter turnout rate of 82.89 percent, with the CPP securing 76.78 percent of votes nationwide.

NEC spokesman Hang Puthea brushed aside the comments made by Mr Kono, noting that Japan will not interfere in Cambodia’s internal affairs.

“Of course, there can never be 100 percent support from the whole world,” Mr Puthea said. “The 600,000 [invalid] ballots were a lot, but if we compare it with the millions of valid ballots, then this number is still low.”

“We are not concerned about Japan cutting aid to the Kingdom,” he added, noting that Japan had provided technical assistance for the election.

“Japan will not meddle in Cambodia’s internal politics,” he said. “Japan understands clearly that the democratic process always meets obstacles.” 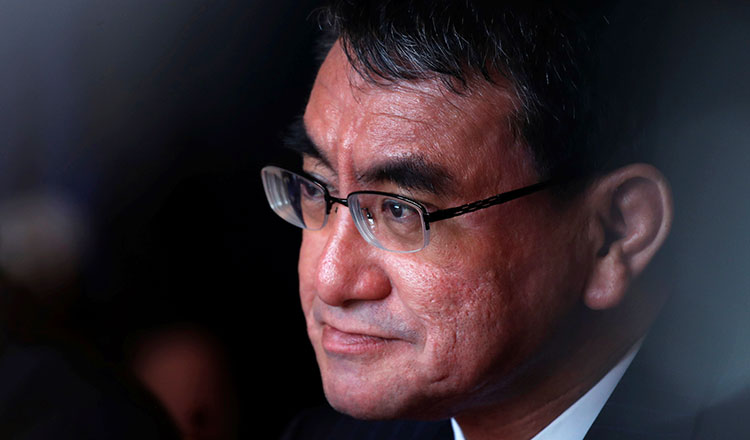 Japan donated about $7.5 million in aid, including 15,000 ballots boxes, to help the NEC secure a free and fair election while the the United States and European Union cut funding to the NEC following the dissolution of the CNRP in November.

He said Japan’s concern regarding invalid ballots is not over the election being unfair, but over the dissolved CNRP undermining democracy through a boycott call.

He added that Cambodia succeeded in carrying out a smooth election, noting that the high voter turnout reflected the people’s will in participating in democracy. 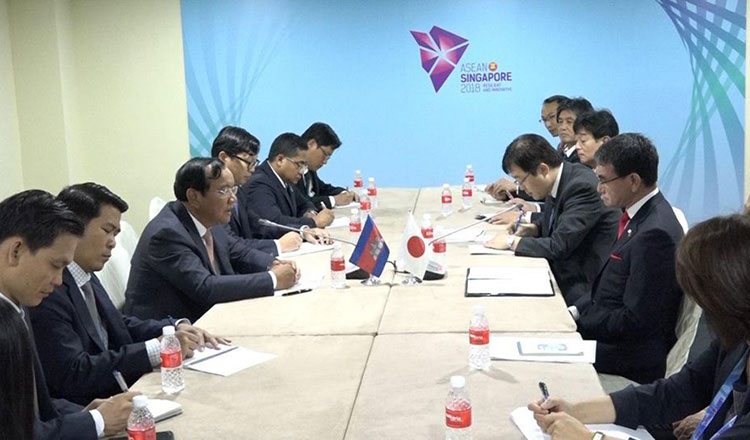 Regarding Mr Kono’s suggestion that the government hold talks with the dissolved CNRP, Mr Eysan said negotiations would materialise once former opposition leader Sam Rainsy served his jail sentences and his members stopped undermining the country.

Mr Wang congratulated Cambodia over a smooth election and opposed the meddling in Cambodia’s internal affairs by other countries.

“The Chinese side has always firmly supported Cambodia’s efforts in safeguarding its sovereignty, independence and stability and opposes any foreign forces interfering in Cambodia’s domestic affairs, and will continue to provide assistance for Cambodia to maintain stability and development,” Mr Wang said.