Home - Providing insight to the government

Sok Touch, president of the Royal Academy of Cambodia, provides his thoughts on the academy’s roles, achievements and ongoing work in researching border, business and social issues for the government. As Mr Touch spoke with Khmer Times COO Kay Kimsong, he also touched upon the independence of the institution, which he took command of nearly one year ago.

KT: What is the role of the Royal Academy of Cambodia?

Mr Touch: The Royal Academy of Cambodia follows the same principles as similar institutions in developed countries. We research, write and publish papers on important national issues aimed at providing input to the Royal Government of Cambodia. In some cases our material is useful to local and international researchers. We research issues such as the flow of commodities along the borders with neighbouring countries and micro financing.

KT: Is the academy an independent institution?

Mr Touch: The academy cannot be fully independent because it is funded by the government. We need to submit proposals on what we plan to research to the government so that it will fund them. A country’s development depends on how much research is funded and done and cannot be based solely on past experiences. If the research is on political issues, we have to be prepared to give some leeway to politicians in order to obtain input. However there is no political interference when we research into scientific or social issues.

KT: In August 2017, Prime Minister Hun Sen gave specific advice on reforming the academy to improve its performance. What have you done so far?

Mr Touch: Firstly, we have tackled administrative reform. RAC has 200 staff and before he appointed me as president many of them were often absent from work. I started a policy whereby whoever played truant would either be demoted or fired. This reform is almost done since I gave them six months to improve. Those found lacking will be sacked. Secondly, RAC has a role to play by doing research on priority issues, such as political, economic and social ones, that the government needs to serve the nation. Within the ten months since I took office, we have done quite a lot. Thirdly, we print material for those wanting to do research and are currently translating foreign studies, such as scientific findings, into the Khmer language. RAC has also established an institute offering Chinese language courses up to the Master Degree level. Chinese products are spreading in the Asian market and if people don’t read Chinese, they won’t understand what the products are. 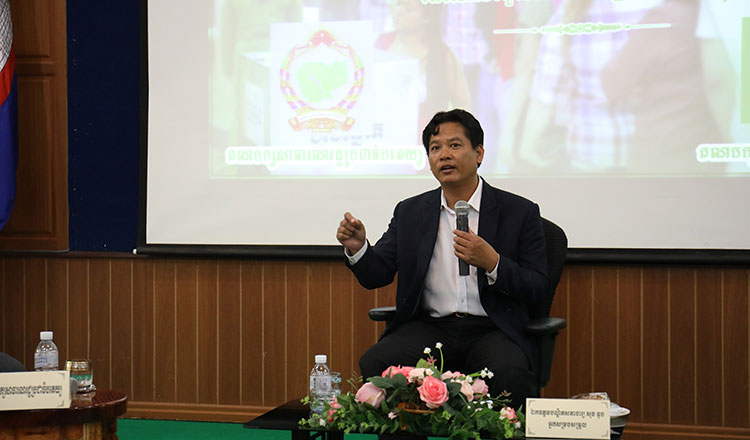 KT: What research have you done regarding border issues, what have you discovered, and do you think our neighbouring countries agree with your findings?

Mr Touch: Research into border issues are still not complete. What studies we conducted cannot be documented until the governments of both sides reach an agreement. We have completed visits along the 1,270-kilometre border, but there are some areas where the border committees of both Cambodia and Vietnam need to complete their tasks. When they finish, then we can conclude our work. We have so far completed 1,000 pages of the book we are compiling on border markers. We will continue to search for border markers between Cambodia and Laos, too. After that, we will work on border markers with Thailand and finally along the coastline.

KT: How much time do you need to complete your border task?

Mr Touch: We can’t give a timeline. As you know, the border with Vietnam spans 1,270 kilometres and we have spent two years on it, but cannot complete the job yet. We still have 540 kilometres left and 804 kilometres of the border with Thailand. Some borders are located near mountains and only the one in Svay Rieng province is on level land. The rest of the border areas are dotted with mountains and lakes, but a road has been built after the research group reported the matter to the government.

KT: Once your border book is printed, do you think we will be able to stop conflicts with neighbouring countries?

Mr Touch: Once the governments of both countries agree on border markers, of course conflicts will stop. If anyone creates any conflict, the issue will go up to the International Court of Justice. We can also strengthen our armed forces to protect our borders. We have three options in any dispute: diplomacy, the ICJ or armed forces.

KT: As a Cambodian scholar, are you confident that the border markers between neighbouring countries will be completed as planned?

Mr Touch: If we have no confidence carrying out this duty, it would be pointless walking from one border marker to another. It was said that walking to check out one border to another would be too difficult. We walked using GPS and I think we have reason to be proud of that. We have to believe that we have a special mission. Some said that it would be dangerous along certain portions and we can’t do our work, such as the Koh Tral Island which belongs to Vietnam. We did not do research on Koh Tral out of respect for an agreement based on a map printed after studies from 1933 till 1953.

Mr Touch: Regarding diplomatic relationships, we do have some good friends, some unpopular friends and some fair-weather friends, but we have no enemy. If we create enemies, we can’t improve our foreign policy. In the 21st century, I believe that Cambodia has never viewed any country to be unfriendly or an enemy. We continue to cooperate with all friends around the globe.