Home - An afternoon with an Emmy winner

An afternoon with an Emmy winner

Can you ever imagine ‘Transformers’ without any visual effects? Can you imagine ‘Cybertron’ so plain and dry and just purely hollow? You can’t, for sure. Thanks to the visual effects incorporated into the film series, the entire ‘fictional’ environment looks so immensely real. This is what Cambodian-American Sina San – the person behind the brilliant artistic effects on ‘Transformers: Dark of the Moon’ – discussed during her recent talk in Phnom Penh. Eileen McCormick shares the 2017 Emmy winner’s educational and inspiring words.

Sina San’s resume is the envy of the visual effects universe. An 18-year veteran of visual effects, the Cambodian-American is credited for her superb works as VFX director and supervisor on many of the biggest Netflix and Hollywood hits out there. Name ‘Westworld’, ‘Transformers’, ‘Alice in Wonderland’, ‘Marvel’s Agents of S.H.I.E.L.D.’, ‘Stranger Things’ and so many other series, she got them all under her belt – not to mention she won a Creative Arts Emmy in 2017 for her superior visual effects on ‘Gotham’.

Last week, the Cambodian film scene and the country in general was lucky enough to welcome Sina San home for a significant forum on the thriving industry of creative vision. The VFX Director Talk, hosted by the Cambodian Film Commission, opened a wider platform for Sina and local visual effects artists and filmmakers to discuss the future of Cambodia’s visual arts.

Despite the rain that poured late afternoon on July 18, the Cambodian Film Commission office was packed with young local artists eager to meet Cambodia’s first Emmy winner for visual effects. Technical artists and filmmakers, who seek a way forward for visual arts and local film industry in general, were also in attendance.

“Visual effects and special effects are both done to make a film look more realistic. However, the way to accomplish the final look varies. Visual effects rely heavily on technology and computer programming. Special effects, meanwhile, comprise of more make-up and props,” said Sina, as she opened the table for discussion. “And because visual effects are more complex and can cost more if not done well in production, it requires more extensive planning.”

Sina shared videos from some of the projects she has worked on. She showed the blue screen used in filming, which allows for mapping that will be used later in the production so the videos can be rendered 3D or layered based on the environment the film is trying to convey to its viewers. This is why having a visual effects supervisor on set is important, especially when it comes to meeting budget expectations.

The supervisor makes sure markers are in place to know precisely where in the shot or camera angle needs to have visual effects added. If these markers are missing or wrongly placed, production time gets extended and the cost in editing and finalising the post-production blows up. As expert on visual effects, the supervisor reads and understands the scripts and see how all the scenes will be shot.

“An important artistic factor when deciding how to add in visual effects is to understand if the story aims to be real or surreal. Take for instance the Transformers. The way in which the camera angles are used required a lot of VFX because it was not just being panned out. The film provided a 3D view to make the world, which does not really exist, come to life. As a VFX artist, I am constantly studying the world around me so I can make my work a reflection of objects as they really are.”

“Think about something as simple as the microphone,” said Sina. “It is painted black so we don’t see the metal but if the mic is left in a forest for 10 years, how would it look? Would it have scratches? Would moss or other vegetation be growing around it? This is how I go about the process of creating texture and lighting in order to make the viewer see that what I am rendering is real.”

An audience member asked Sina about the computer programmes needed to do what she had just discussed. Sina shared that she and most people in the industry use Nuke, developed by The Foundry. While there are other many programmes and add-ons, Nuke, for her, does the best job in terms of rendering in 3D without lagging or crashing.

“Now from meeting with some of you, I know most of you want to know how long it takes to master some of these programmes. Well, please understand Cambodia has all the resources it needs – computers, cameras, programmes that work. Despite this, I keep hearing ‘we can’t do this’. But really, there’s no valid excuse.”

“Anyone can watch YouTube or read a book to know how to use these programmes. We don’t always get the outcome that we want from someone who just knows how to push buttons. This industry is actually less about Information Technology. It’s about having an artistic eye.”

Having done several works for American series and experienced working for famous names in the creative industry, Sina knows that the only way Cambodia can advance forward is to be unique, to stop copy-pasting the same projects all over again. She added that putting personal expression and vision to a film will make the work standout. This, she said, is the reason she has prospered in the field she has chosen to take a little less than two decades ago.

“Cambodia has some historical examples of having art created and then re-created but with slight difference, creating a whole new dimension to that subject. I often think about the past Kings and the ruling empires. One temple was created under one King, then the next one comes along adding something to a new temple. You can go to Angkor Wat and see similarities. But you will also quickly notice from the different parts how things have been re-created and re-designed, adding unique elements to that structure.”

Sina also emphasised how Cambodian films can be distributed and be known globally. She said filmmakers must be careful in creating the screenplay. If the context is overly Cambodia, the chances of it being shared outside the borders is quite low. But, utilising a backdrop of Phnom Penh with a story or plot that is relatable to a wider, foreign audience will make international success a possibility. 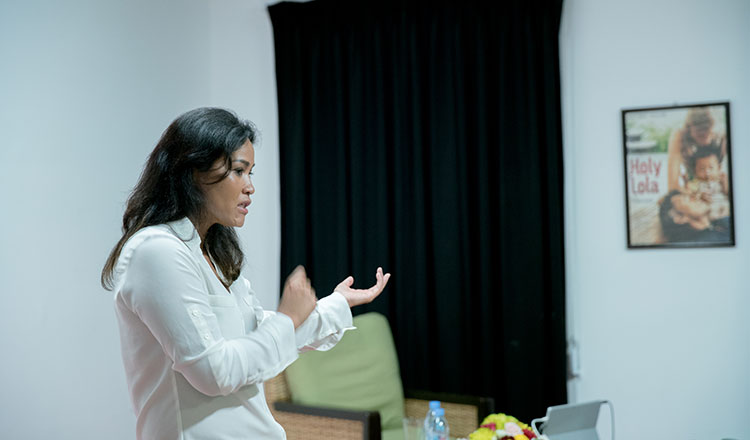 “Personally, I want to see more of Cambodian art and culture shared and consumed on a global stage. This means we can’t wait for Hollywood to cast people like us or let their system limit our platform to share our own stories.

“I came back to Cambodia to collaborate with other local artists and see if there’s an interest in gaining more training and experience in visual effects. I have plans to possibly run a company called Light Box, but I have to see first, collect information to see if this is something people in the country wanted or not.

“Because who I am to say if I can teach or I can’t. I only know that from my experience, there is always a room to collaborate. Because there are already projects lined up that can be done in the country, but I need to make sure I can deliver and that we have the right talent.”