Three people have died and thousands more have been displaced as multiple provinces continue to be hit by floods in communities along the Mekong river.

Keo Vy, spokesman for the National Committee for Disaster Management, said the three victims died earlier this week during the floods in Stung Treng and Kampong Cham provinces.

“There’s heavy rain and the Mekong river remains overflowing, making more and more water spill into local communities in those provinces,” Mr Vy said yesterday, noting that a collapsed dam in Laos has contributed to the problem.

“Provincial authorities are evacuating residents, animals and people’s belongings to a safer place in order to prevent loss of life,” Mr Chanda said. 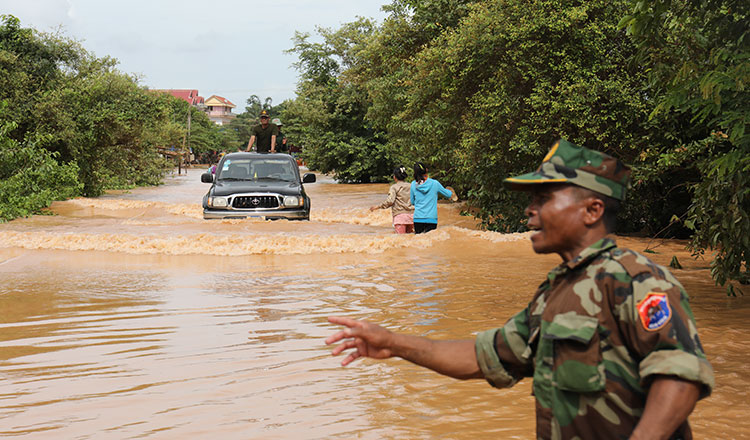 “Officials are trying to reduce the flood by using water pumps and using sandbags to block the water,” an unnamed official said.

On Tuesday, Men Neary Sopheak, the deputy secretary-general of the Cambodian Red Cross, donated $50,000 to the Lao government as a relief package for flood victims.

“On behalf of the Cambodian Red Cross, I would like to convey my condolences to you and the people of Laos,” Ms Neary Sopheak said in a letter to her Lao counterpart.

Earlier this week, the Cambodian government donated $100,000 in humanitarian aid to Laos via the Foreign Affairs Ministry.

The Ministry of Water Resources and Meteorology yesterday said that over the next few days regions along the Upper Mekong will continue to flood as water continues to come from Thailand and Laos.

Last week, Stung Treng officials evacuated 1,289 families, or roughly about 5,000 people residing along the Sekong River after the collapse of the dam in Laos.

The National Committee or Disaster Management said at the time that the floods caused by the dam affected multiple provinces and the capital city. It said that nearly 7,000 people were affected.