Home - People offered free rides on water taxis till at the end of this year, Hun Sen says

People offered free rides on water taxis till at the end of this year, Hun Sen says

Prime Minister Hun Sen announced today that people are offered rides free of charge on the water taxi system and western rail line until the end of this year.

Speaking during an inauguration of the water taxi system in Phnom Penh’s Russey Keo district, Mr Hun Sen said that people using the boat taxis operating between Prek Pnov area, the northern part of Phnom Penh and Kandal province’s Takhmao city enjoy free rides till the end of this year.

“Using the water taxi system from Prek Pnov area to Takhmao city is free of charge until the end of this year. But from January 2019, the fee will be charged,” he said. 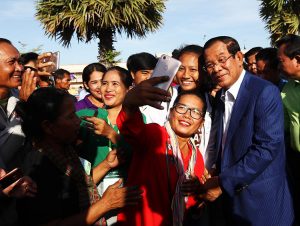 Fares for boat taxis will vary depending on the distance, with the cheapest ticket being 1,000 riels ($0.25) and the most expensive 8,000 riels ($2), according to the Ministry of Public Works and Transport.

More than 30,000 passengers used the waterway taxi services since its launch in April. There are three boats in operation from 6 am to 6 pm, stopping at six stations along the waterway. The boats can carry a maximum of 60 passengers at a time, according to figures from the ministry.

Mr Hun Sen said that people using train operating between Phnom Penh and Banteay Meanchey province’s Poipet city will also enjoy free rides until at the end of this year.

“For Western rail line from Phnom Penh to Poipet city and Poipet city to Phnom Penh, the service will be free of charge until early 2019 and then we will check this issue again. This is the gift for Cambodian people to congratulate a new success of the economy and politics for Cambodia,” Mr Hun Sen said.

The Western Railway stretches for nearly 386 kilometres, connecting the capital to Poipet city. Restoration of the railway, which was destroyed during the armed conflicts, finished this month.