COLOMBO (Xinhua) – Sri Lanka has launched a tourist-friendly tuk tuk service which initially will cover the capital and later be extended to cover the rest of the island, including other major tourist cities.

Tuk tuk drivers who had successfully completed the training programme received the logo and their certificates from Prime Minister Ranil Wickremesinghe at ceremony held at Galle Face Green, here on Monday.

The ‘tourist-friendly’ logo is a pride mark to distinguish high-quality tourism-related service providers in Sri Lanka.

The logo and the branding will allow tourists to easily identify the ‘tourist-friendly’ tuks and obtain their services.

Over 750 tuk tuk drivers have been trained by the Sri Lanka Tourism Development Authority (SLTDA) so far, in several districts, under its tourist-friendly training programmes. They have been trained as tour guides as well as drivers to local and foreign tourists.

All drivers who successfully complete the programme will get a special ID from the SLTDA, in addition to the tourist-friendly logo and the certification.

Tuk Tuk’s are a popular mode of public transport in the island country with over one million tuk tuks currently on the streets of Sri Lanka. 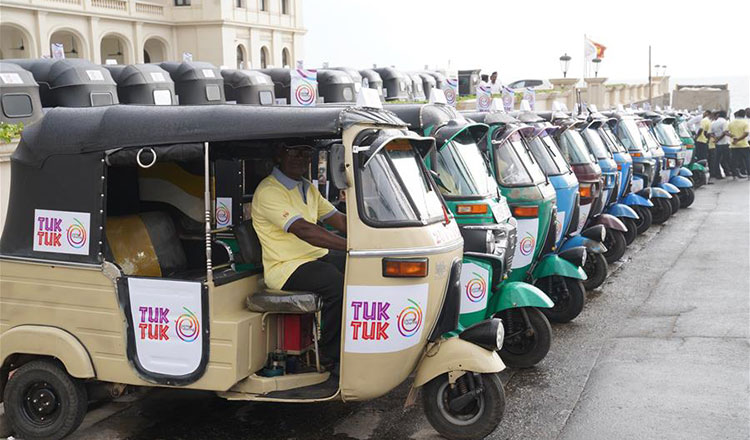 Mr Wickremesinghe, while speaking at the roll out ceremony, said tuk tuks were a popular mode of transportation in Sri Lanka and this program would economically strengthen the tuk tuk drivers.

He said any traveller using the public transport would first take into consideration their safety and for this the government was responsible.

“So all of these drivers present today have been approved by the government as they have undergone training and are well qualified. We hope more drivers will join this program in the future.”

Mr Wickremesinghe also called on the tuk tuk drivers to learn more foreign languages such as Chinese, Indian, Japanese, German, Arabic, English, among others, in order to provide better services to the tourists.

“Even to train them in foreign languages, the government will help them,” he said.

Tourism Minister John Amaratunga said the programme will also cover eating places and homestays in the future, uplifting the quality and standards of the Sri Lankan tourism industry to attract more and more tourists.