The national election may have been competitive if the former opposition CNRP had participated, a scholar said yesterday during a discussion organised by Khmer Times.

Chheang Vannarith, a scholar from the ISEAS-Yusof Ishak Institute in Singapore, also said that voters were only left with the CPP as a viable choice in the election, meaning that the ruling party now needs to uphold its promises to voters and continue government reforms in order to maintain the public’s support.

The CNRP was dissolved in November after its leader Kem Sokha was jailed on treason charges. In 2013, the CNRP won 55 out of 123 National Assembly seats, with the rest going to the CPP.

“If the CNRP wasn’t dissolved, I think the election results may have been different, probably a closer race, although this was not a certainty” Mr Vannarith said. “In any event, what is important is that we can see that this year’s election was peaceful and quiet unlike the previous election in 2013 when people were concerned about insecurity.”

It is likely that a bulk of former CNRP supporters who turned out to vote on Sunday cast their ballot for the CPP or other parties instead, Mr Vannarith said.

“Opposition voters faced a dilemma during the election. Among the 20 political parties, they might have thought that there was no other viable choice but the CPP,” he said. “Or maybe they didn’t trust the smaller parties, so they voted for the CPP.”

According to the National Election Committee, 82.89 percent of 8.3 million registered voters turned out to vote on Sunday, up from 69.6 percent in 2013. 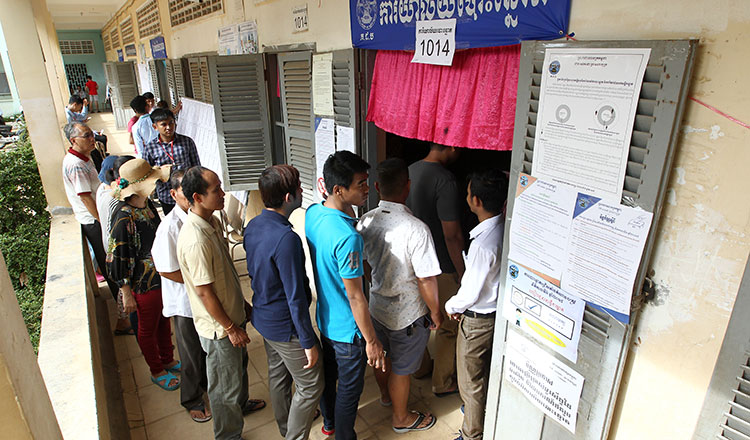 Sam Rainsy, a former CNRP leader in exile, claimed on his Facebook page that the spike in spoiled ballots represents a protest vote by former opposition supporters.

“The spoiled votes totalled 573,522 votes, or 9.22 percent of total votes, ranking ahead of any of the other 19 officially registered parties,” Mr Rainsy said.

The CPP earned about 4.8 million votes, ensuring its continued rule and putting it in a position to be held accountable going forward, said Mr Vannarith.

The ruling CPP must now take further action to reform public service and increase social justice as it takes seats in the National Assembly, he said.

“We must admit that the CPP reformed the way it conducts politics. They tend to get close to people. Their political messages are clear and better from time to time,” he said. “With a landslide victory, the CPP face bigger responsibility and pressure from its voters. Cambodian voters are smart now. They will wait to see what the party pledged to do after the win.”

“People demand good public service. It’s not only when they pay, they get public service. Another one is social justice; we must have an independent judiciary. The court must be able to bring justice. Otherwise, only unrest will remain,” Mr Vannarith added.

People offered free rides on water taxis till at the end of this year, Hun Sen says