Stung Treng province – Choeu Doung was smoking her pipe while preparing noodles for her grandchildren at a temporary shelter atop a hill here in Siem Pang district when she recalled her surprising escape from floods last week.

Thousands of families along the Sekong river were evacuated last week after the collapse of a dam in Laos led to a deluge in the district.

A member of the Kavet ethnic minority, Ms Doung and her family were among 15 other families in Santepheap commune’s Titeam village displaced on Wednesday.

During the evacuation by the authorities, she was only able to take a few articles of clothing and a hammock before she was instructed to move to higher grounds.

She said that it’s not unusual for her village to be affected by floods about this time of the year, but the severity was surprising and villagers weren’t prepared.

“We had difficulty crossing the river in order to seek shelter elsewhere, as water quickly inundated roads around the village,” she said. “We have never done this before, the timing of the flood was unusual. It was scary when we learned about the Lao dam’s collapse.”

Ms Doung and her family were only given moments to pack up their belongings before they had to evacuate.

“I was only able to take one hammock, two ports of rice and some soup – my chickens remained in the village,” she noted.

Titeam village chief Choeu Kamla said on Friday that villagers had to travel about four kilometres away to where authorities had set up temporary shelters.

“If the water keeps rising, more people will be evacuated,” he said while carrying a pig and several chickens with his wife. “We are concerned about the damage this flood will do to our rice paddy and crops; I suppose we’ll find out after the water subsides.”

Ms Doung’s and Mr Kamla’s families are among 1,289 displaced, or roughly about 5,000 residents in four communes along the Sekong river in Siem Pang district.

Authorities deployed about 400 soldiers and park rangers to assist those affected by the floods. Their priority was to evacuate the most vulnerable. Transport trucks were prepared to not only carry women and children, but also senior citizens. Sergeant Major Sam Sopheak said on Friday that he had received orders to lead a unit of 110 soldiers to help evacuate several villagers in the area. 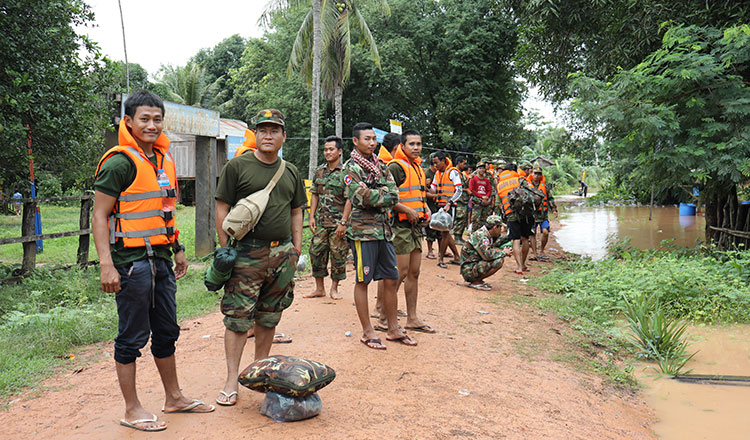 “Our forces helped evacuate many villagers to safety and we also helped set up temporary shelters for the displaced,” he said. “We also transported their belongings.”

“We do what we can to help, it’s our obligation, especially since there were a lot of people facing difficulty,” he added.

Many district officials took boats to get to the evacuation centre. They also brought tents and noodles to distribute to villagers. 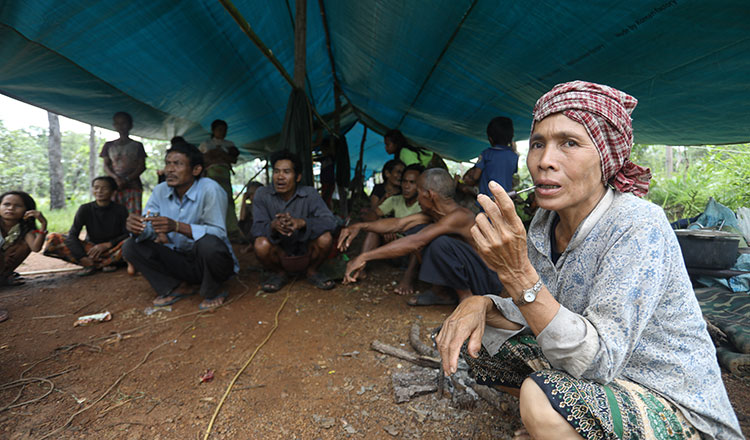 “We brought tents, noodles, and dirt-sacks to prevent water from flowing,” Mr Sokha said, adding that he will appeal to NGOs tasked with handling humanitarian crisis to donate provisions for displaced villagers.

The Ministry of Water Resources and Meteorology said on Saturday that water in the Sekong river will gradually subside.

But even though the water will subside, villagers are worried about their crops.

Back at her temporary shelter, Ms Doung said that her harvest was ruined by the floods. She appealed to the government to intervene in recuperating finances when the flood water subsided. “We will eventually return to our land and clean our homes,” she said. “But we will have to regrow our rice paddy again.”

In a statement released over the weekend, Save the Mekong Coalition, a group of environmental NGOs in the region, said that the collapse of the dam was caused by human error on the part of the dam builders.

It added that the Lao government must fully assess the incident and prevent it from occurring again in the future.

“Project developers, financiers and investors must be held fully accountable for the damage caused by the Xe Pian – Xe Nam Noy project in accordance with Lao law and international standards and best practice,” the statement said. “Project developers and financiers must take full responsibility for all losses and harm, including for those downstream in Cambodia.”