A minivan driver yesterday had a narrow escape after a battery explosion caused a fire which completely razed the vehicle in Kampong Cham province’s Kampong Siem district.

District deputy police chief Major Kao Seng said the driver Sour Theng, 38, jumped out of the vehicle immediately after the explosion at about 8.30am in the district’s Ampil commune.

He said Mr Theng was driving to pick up passengers on his route from the province to Mondulkiri province when the incident happened.

“While he was driving along the road in Kampong Cham province’s Ampil Leu village, there was a loud explosion,” he said. “Mr Theng quickly jumped out before the ensuing flames engulfed the minivan and completely destroyed it.”

“Fortunately the fire did not injure anyone,” Maj Seng added.

He said police patrolling nearby heard the explosion and went to investigate, adding that two fire trucks were deployed and the flames were doused in about an hour. 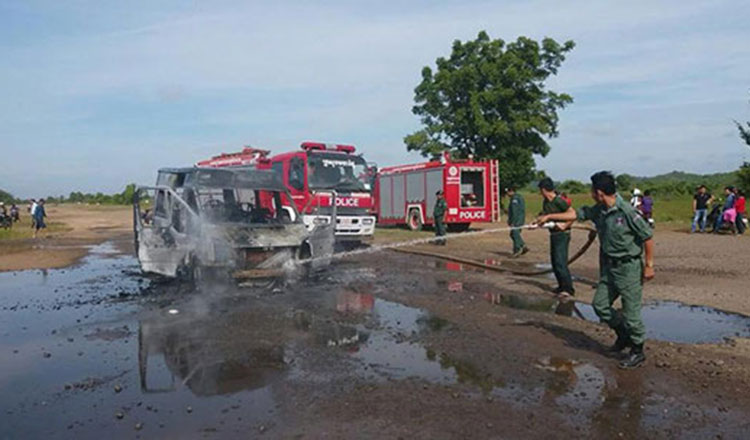 Maj Seng said an investigation showed that the battery in the minivan had exploded and that Mr Theng had been careless by not inspecting the vehicle before driving.

Kampong Cham provincial deputy police chief Brigadier General Min Sokunvibol said Mr Theng was taken in for questioning and then released because no one was injured.