“The PEC has received more than 100 complaints from political parties over the election process so far,” said Nim Vamsam, head of Siem Reap provincial election commission.

Mr Vansam said that the League for Democracy Party filed about 100 complaints to the PEC involving with ballot ticking and distribution of leaflets on July 28 by the Khmer coNational United Party.

He said that there were no irregularities in the election process. 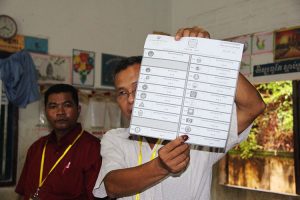 Khun Savoeun, lawmaker candidate for the Grassroots Democratic Party in Siem Reap province, said that he found some irregularities during the election process and that his party officials will hold a meeting to discuss how to deal with it tomorrow.

“We found some irregularity cases happened during the election process,” Mr Savoeun said.

He said that the number of the people who turned out to vote was less than the 2013 election because some of the people did not come to vote.

“It is very regretful that some people did not vote because they failed to exercise their rights,” Mr Savoeun said.

In Siem Reap province, there were 535,521 voters registered to vote yesterday and 393,607 cast ballots, a turnout of 73.5 percent, according to the National Election Committee.